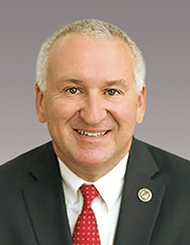 Rich believes success is more about the why than the how, an ideology that has helped him thrive and find meaning in his career. As president and CEO of Church Mutual Insurance Company, Rich’s “why” is serving the ministries, schools and nonprofits his company insures.

“We help the most vulnerable organizations in their times of need as they cope with and recover from hurricanes, wildfires, violent events and so much more,” he says.

Rich joined Church Mutual as its vice president for claims in 2011 and was promoted to chief operating officer and then president. He’s held his current position since January 2016. Previously, he held senior management positions at Liberty Mutual and Wausau Insurance Companies.

A Connecticut native, Rich attended Marquette on a scholarship, but he was also looking for adventure at a school he’d never visited — and adventure he got. Rich met his wife, Jane (Vormezeele), Nurs ’83, on campus. His classes taught him an important lesson: The world is not black and white. “My education also taught me to question the status quo and seek the truth, even if the truth is inconvenient or unpopular.”

After graduating, Rich was accepted into the U.S. Navy’s Law Education Program and served four years of active duty as a Navy judge advocate. He continued his service in the Navy Reserves until retiring with the rank of captain in 2010. He’s received numerous awards and decorations for his service.