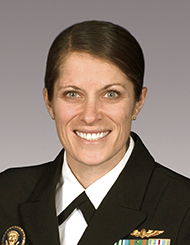 As head of the health care business operations department for the Naval Health Clinic New England in Rhode Island, Kristin has always set her aspirations high and realized them.

Like when she transferred to Marquette her sophomore year to join the track team, she set numerous Marquette records in pole vaulting. Her favorite part, though, was running track with her sister, Amy, Bus Ad ’08. Both were inspired by their parents, Steve and Kathy, who always taught the importance of family and spending quality time together.

“She was a strong role model of a successful working mom who would do anything for her kids,” Kristin says about her mother. “Success is setting your mind to do something and achieving it, even when obstacles come in your way.”

And achieving it Kristin did. This Navy ROTC graduate worked as a White House nurse, responsible for emergency health logistics for both Presidents Obama and Trump. A particularly rewarding part of her Navy career was caring for military service members in Kuwait and Afghanistan. She has earned her certification in emergency nursing. This gratifying profession has provided her unique opportunities she never expected.

Kristin says, “Marquette’s mission is present in my day-to-day life as a Navy nurse. The lessons of leadership and excellence I learned while being a student at Marquette formed a strong base that has been growing ever since.”

Her career goal is set just as high — to be director of nursing at a Navy hospital, so she can mentor younger nurses.

What does this award mean to you? “It’s an honor to be considered and selected for this award among all the talented and successful nurses who went to Marquette. The Marquette community has been such a large part of my life and helped develop me into the person I am today. The foundation I learned from the College of Nursing as well as from Navy ROTC has formed me into the Navy nurse and leader I am today.”