ALUMNA OF THE YEAR AWARD 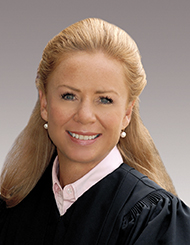 Wisconsin Supreme Court Justice Annette Ziegler is proud to serve the people of Wisconsin. Her own family motivates her efforts. “As a wife and a mother, I’m invested in this state in a very personal way. I want it to be a great state for future generations.” Annette learned the value of a hard day’s work from her parents, who owned a hardware store in Michigan. “They raised me in a household filled with love, respect, honesty, hard work, and deep appreciation for the blessings of this country.”

This foundation is probably what led Annette to Marquette. “The university’s emphasis on traditional values of honesty, hard work and service above self has served me well throughout my entire career.”

Annette began her career in private practice, then served as an assistant district attorney in Milwaukee County, and later as an assistant U.S. attorney. She was a judge of the Washington County Circuit Court from 1997 until becoming a Wisconsin Supreme Court justice in 2007.

“I’ve devoted my career to the service of the citizens of Wisconsin. I’ve also devoted significant resources and personal commitment to my church, the Boys and Girls Clubs of Washington County, feeding the homeless and various other charitable organizations.”

When Justice Ziegler was in grade school, what did she want to be when she grew up? A meteorologist

Whom would Justice Ziegler like to have dinner with? Mother Teresa