Marquette University will host two Commencement ceremonies — one for undergraduate students and one for Graduate School and Graduate School of Management students — on Sunday, May 22, at Henry Maier Festival Park (Summerfest grounds).

The Law School, School of Dentistry and College of Health Sciences’ professional programs (Physical Therapy, Physician Assistant Studies) will instead host individual ceremonies and will communicate directly with their students about Commencement. 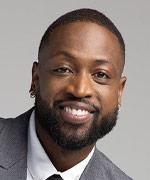 Dwyane Wade is a three-time NBA champion and Olympic gold medalist. He attended Marquette from 2000 to 2003 and was selected number five overall in the 2003 NBA Draft months after leading the Marquette men’s basketball team to the NCAA Tournament Final Four

Wade played the majority of his career with the Miami Heat, winning league championships in 2006, 2012 and 2013. He was named NBA Finals MVP in 2006, MVP of the 2010 NBA All-Star Game, and was chosen as one of the league’s 75 Greatest Players in NBA history in conjunction with the league’s 75th anniversary celebration in 2021. He represented the United States twice at the Olympic Games, winning a gold medal in Beijing in 2008. 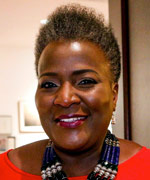 Thelma Sias is the founder and president of The Sias Group, which provides political and leadership consulting expertise. A successful and sought-after professional speaker known for her passion for people, Sias says her speeches are extensions of her life and work experiences. She uses her speaking opportunities to develop the careers and skills of a diverse group of professionals.

Prior to retiring in 2017, Sias served as vice president of local affairs for We Energies. In this role, she was responsible for building and enhancing long-term relationships with Milwaukee community leaders and the government to garner support and approval for the utility’s critical corporate initiatives. In addition, she has held numerous leadership roles in the greater Milwaukee community and serves as a key connector to business, community and political leaders. Sias serves on several civic and community boards, including the African American Women’s Project, United Way of Greater Milwaukee & Waukesha County, the Boys & Girls Clubs of Greater Milwaukee, Sojourner Family Peace Center, and Cardinal Stritch University.

Please continue to visit this website for updated Commencement information!

Welcome To Our Alumni Family

PROBLEM WITH THIS WEBPAGE?
Report an accessibility problem