Second Sunday of Lent: The Transfiguration

Mount Tabor is 1800 feet above sea level and it is the place that most ancient scholars agree is the site of the Transfiguration. In the Synoptic Gospels the transfiguration follows Jesus questioning his disciples: “Who do you say that I am?” When he saw they were starting to get it, he revealed a deeper understanding of himself. He was going to suffer and die and after three days rise from the dead. So the condition for following him was they must be willing to lose their lives for his sake and the sake of the Gospel. Then six days after this hard teaching, Jesus takes his trusted threesome, Peter, James and John, to Mount Tabor and was transfigured before them. Having the Gospel of the Transfiguration so close to the beginning of Lent, points to the conclusion of the Lenten Journey — the celebration death and resurrection of Jesus. We do not have to pretend that Easter has not happened, but we are invited to grow in our faith understanding of this the most radical and fundamental of our Christian beliefs.

Jesus took Peter, James and John his brother, and led them up a high mountain by themselves. And he was transfigured before them; his face shown like the sun and his clothes became white as light. And behold, Moses and Elijah appeared to them, conversing with him. Then Peter said to Jesus in reply, “Lord, it is good that we are here. If you wish I will make three tents here, one for you, one for Moses, and one for Elijah.” While he was still speaking, behold a bright cloud cast a shadow over them, then from the cloud came a voice that said, “This is my beloved Son with whom I am well pleased, listen to him.” When the disciples heard this, they fell prostrate and were very much afraid. But Jesus came and touched them, saying, “Rise, and do not be afraid.” And when the disciples raised their eyes they saw no one else but Jesus alone. As they were coming down from the mountain, Jesus charged them, “Do not tell the vision to anyone until the Son of Man has been raised from the dead.”

On your holy mountain he revealed himself in glory in the presence of his disciples. He had already prepared them for his approaching death. He wanted to teach them through the Law and the Prophets that the promised Christ had first to supper and so come to the glory of his resurrection. 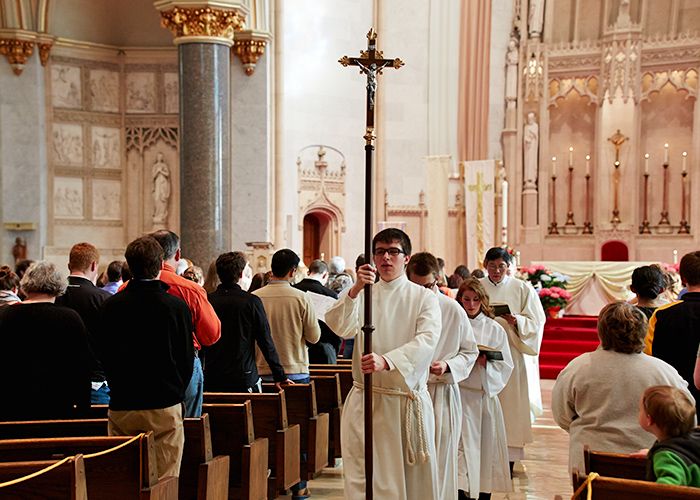