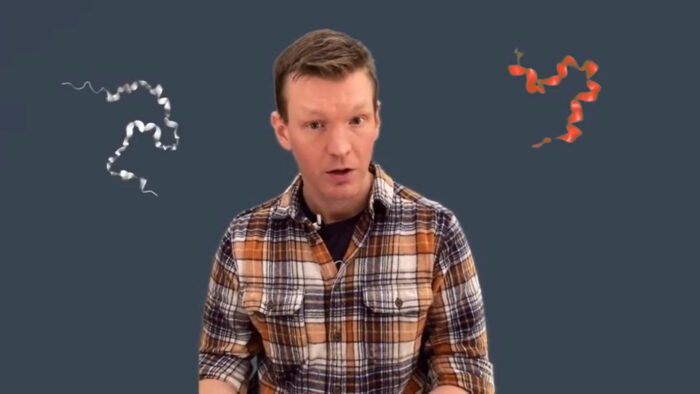 The “Fund It Forward” competition encourages undergraduate and graduate researchers to spread the word about why science matters. Knier’s video submission offered a metaphor to describe his work in the lab of Dr. Anita Manogaran, associate professor of biological sciences, which is being funded by the National Institutes of Health. His work is focused on how cluttered or aggregated proteins are associated with disease.

“We don’t know how to disassemble the individual pieces from the overall cluttered protein within the body,” Knier said in his video, describing the misfolded and aggregated proteins that are linked to aging disorders such as Alzheimer’s and Parkinson’s Disease. “Evidence suggests baker’s yeast contains unique tools to break up this cluttered protein, but more funding is needed before the field can move into clinical trials.”

Manogaran recently received a $950,000 grant from the National Science Foundation this year to address fundamental questions about how cells respond to and manage misfolded and aggregating proteins. Diseases such as Alzheimer’s, Parkinson’s or amyloidosis are aging disorders that are linked to misfolded, aggregated proteins in tissues such as the brain or heart.

“Adam is an amazing communicator and scientist. He has the unique ability to explain complicated topics in a way that is relatable for laypeople. I am very happy that Adam is being recognized for his talents,” Manogaran said. “His video also underscores the dire need for continued investment in science, especially as it relates to research on these devastating diseases.”

As the third-place finisher, Knier receives a financial prize. His video remains posted on The Science Coalition website as a reminder that federal funding for research is critical for human health.

The Science Coalition is a nonprofit, nonpartisan organization of more than 50 of the nation’s leading public and private research universities, of which Marquette is a member. It is dedicated to sustaining the federal government’s investment in fundamental scientific research as a means to stimulate the economy, spur innovation and drive American competitiveness.