Marquette Latinx undergraduate enrollment doubles over last decade, now up to 15% as part of HSI initiative 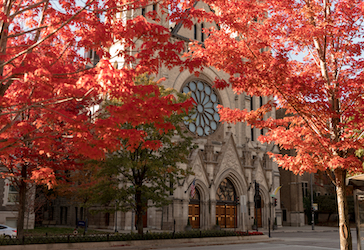 MILWAUKEE — Marquette University offered an update on its commitment to becoming a Hispanic Serving Institution in a letter to the campus community from Provost Kimo Ah Yun.

“Since its launch in 2016, the HSI initiative has been a strategic, institutional priority — that has not and will not change,” Ah Yun wrote. “Our vision is to be among the most innovative and accomplished Catholic, Jesuit universities in the world — that cannot happen unless we embrace the perspectives, cultures and knowledge of our diverse students, faculty and staff.”

The student population that identifies as Hispanic/Latinx has more than doubled over the last decade, while increasing in each of the past 15 years. In the 2020-21 academic year, both the undergraduate and graduate student bodies are the most diverse in the history of Marquette.

Marquette has provided Latinx students with $33 million in financial aid in the 2020-21 academic year, while other efforts to support students financially have included more than $250,000 raised for the Ellacuría Scholarship for undocumented students through 2021, and up to $30,000 in matching funds for HPGM scholarships offered to Marquette students

“Importantly, the initiative is about more than just enrollment numbers; quite frankly, it is about more than Latinx students,” Ah Yun wrote. “This endeavor is about making Marquette a more welcoming and inclusive space for all our diverse stakeholders. HSI speaks to the very heart of our values as a Catholic, Jesuit institution: to serve the traditionally underserved, to provide care for each of our students, and to strive for inclusive excellence.”

The university has launched many efforts across campus to engage diverse stakeholders, including the Office of Undergraduate Admissions’ Community Ambassadors program for near-peer outreach to local high schools, on-site admissions for 11 local schools, transfer articulation agreements with two-year institutions, and added transitional support.

Other programs include the Race, Ethnicity and Indigenous Studies program; the RISE pre-orientation program for students of color; employee resource groups; and the launch of the Hispanic Alumni Association. There have also been opportunities for employees to engage in critical learnings around issues of race and bias and the beautification and diversification of campus spaces, such as through the "Our Roots Say That We're Sisters” mural project.

“Through ​Spanish-language and community outreach, programs targeting underrepresented students, and initiatives and resources ​for low-income and first-generation college students, we are continually innovating the ways we can break down barriers to a Marquette education,” said Jacqueline Black, director of Hispanic initiatives. “It is a part of our Catholic, Jesuit mission to find avenues to make accessible the transformational educational experience that the university has offered for almost 140 years.”

Marquette has also added Spanish language pages on Marquette.edu and social media accounts—@SomosMarquette on Twitter and Instagram—to assist the growing population of Hispanic prospective students and their families, as well as connect current students to resources offered in their heritage or native language. Visitors to the Spanish pages will find prospective student information, resources for the community that offer Spanish-speaking services and contact information for Spanish-speaking faculty and staff across campus.

According to estimates by the U.S. Census, Latinos have accounted for just over half of the country’s population growth over the last decade and are the second largest racial or ethnic group. Estimates have the population continuing to grow, reaching just under 100 million in the next 30 years.