This bronze statue, which honors the 17th-century French, Jesuit missionary and explorer for whom Marquette University is named, stands 8 feet 2 inches tall and weighs between 2,500 and 3,000 pounds. John (Bus Ad ’56) and Mary Madden made a gift of this statue as part of the Magis Campaign, and it was dedicated on Sept. 23, 2005.

Located on Central Mall, immediately east of St. Joan of Arc Chapel, the statue depicts a mature Father Marquette, his face weathered by the elements and his cassock beaten with wear. He carries a map, a salute to his explorations of the upper Mississippi River with French fur trader Louis Joliet, and wears a crucifix at his belt. Father Marquette appears to be stepping away from the water’s edge, a pose that illustrates both his long journey and his evangelizing of Native American tribes that included baptizing 4,400 people in a single day. 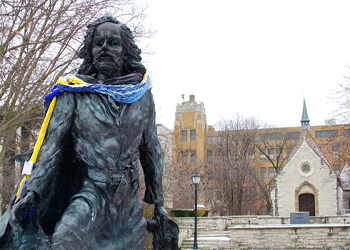