Gift of Mr. Leonard J. Scheller
Collection of the Haggerty Museum of Art

Arguably one of the greatest religious artists of the 20th-century, Georges Rouault (1871–1958) helped revive the relevance of Christianity in post-WWI France. As a young man, Rouault served as an apprentice restorer of stained glass at Saint-Séverin, a gothic church in the heart of Paris. He went on to study with Gustave Moreau, known for his illustrations of biblical and mythological figures. Under Moreau’s tutelage, Rouault learned to harness the power of spiritual symbols in his own artwork.

Rouault’s Miserere (Mercy) series, first titled Miserere et Guerre (Mercy and War), was commissioned in 1916 by art dealer Ambroise Vollard (1865–1939). Originally planned as a two-volume book comprised of 50 prints each, Miserere was only partially realized — with 58 prints published in 1948. The series illustrates man’s cruelty to man, relates human suffering to the passion of Christ, and speaks to the redemption and salvation that can be achieved through that experience.

In Miserere, Rouault makes recurring use of sacramental symbols and devotional imagery originating in the Middle Ages. By fusing early Catholic spiritual truths with his own experiences in 20th-century France, Rouault creates uniquely modern religious narratives. 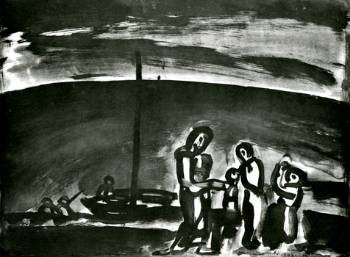