“If you can’t feed a hundred people, then feed just one.” – St. Teresa of Calcutta

Mother Teresa, a recipient of the 1981 Marquette University Père Marquette Discovery Award, was born in 1910 in what is now the capital of the Republic of Macedonia, and died in Calcutta, India, in 1997. She labored among the poorest of the poor, first in India and then later all over the world. She founded the Missionaries of Charity, a religious congregation of women, and her work with the abandoned, sick, and dying was recognized in 1979 when she won the Nobel Peace Prize. By 1996, one year before her death, she was operating 517 missions in more than 100 countries. Mother Teresa was beatified by Pope John Paul II in 2003. Her loving spirit inspired philanthropy across the world.

Pope Francis canonized Mother Teresa as a saint in 2016.

This gift was made possible by the Kuttemperoor Family, through their friendship with Dr. Prem S. Sharma, professor emeritus and associate dean emeritus, School of Dentistry. 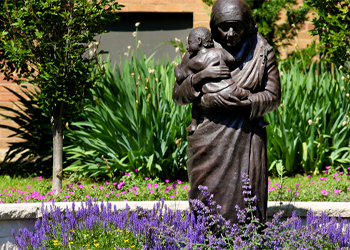