Service to the Community Award 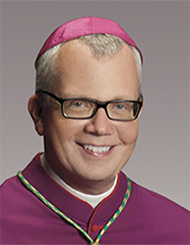 
A Catholic bishop’s very vocation is servant leadership. Bishop Hying, known widely for his deep compassion, humility and kind heart, considers his work a privilege: “Being with people in the most poignant, meaningful, joyful and sorrowful moments and to speak of God and His mercy is a true blessing.”

For Bishop Hying, receiving Marquette’s Service to the Community Award represents recognition not of him, but of “the importance of church leadership, both for the community of faith and for the common good of society.”

Bishop Hying grew up in New Berlin, Wis., the youngest of six boys born of devout Catholic parents. His interest in the religious life was sparked early, and he points to four key influencers: his parents’ deep faith and spirituality; the death of a brother at age 10 from cancer; the “fascinating” visits he made to the seminary while another brother studied there; and his reverence for Pope John Paul II.

An extraordinary intellect and photographic memory earned him an honors bachelor of arts degree from Marquette in 1985. He majored in history, philosophy and theology, yet kept only one notebook during his four undergraduate years — a clue to those who knew him that underneath his humility lay great gifts. He went on to earn his master of divinity from St. Francis Seminary before his ordination in 1989.

Bishop Hying served at multiple Milwaukee-area parishes before becoming rector of St. Francis de Sales Seminary in 2007. Pope Benedict XVI named him an auxiliary bishop of the Archdiocese of Milwaukee in 2011. In the official announcement, Archbishop Jerome Listecki called the bishop –elect “a true servant-leader,” and his appointment a “proud moment for the church in southeastern Wisconsin.”

In late 2014 Pope Francis appointed Bishop Hying to his current position leading the Diocese of Gary, Indiana as its fourth bishop. “I felt at home almost immediately in Northwest Indiana,” Bishop Hying said. “I know I’m exactly where God wants me to be.”

Guided by the Jesuit vision of “contemplatives in action,” Don rolled up his sleeves and got to work organizing a diocesan synod “the church’s version of a long-range strategic plan,” he explains — to spur each of the 72 parishes to contemplate ways to grow their faith communities. His current areas of focus include tackling the diocese’s priority of youth formation and education, contemplating a first-ever capital campaign, and serving a six-year term as the national episcopal adviser of the Society of St. Vincent de Paul.

“I love being a bishop,” says Don, adding that to him, “Success is doing the will of God and fulfilling one’s mission in the world.”