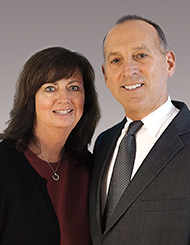 Breaking into the entertainment industry is notoriously tough, but showbiz-bound Marquette students and alumni can count on two valuable connections in Hollywood: Nancy and Joel. Their passion for helping their Marquette community has inspired an influential network of engaged West Coast alumni. “We’re creating a Marquette Family Network,” says Joel, “through our continued engagement with Marquette and our own successful alumni in Los Angeles.”

Joel and Nancy met their junior year at Marquette while working for student government. Joel decided to move to Los Angeles days after graduation. Nancy joined him a few months later and quickly found work as an accountant at the Gillette Papermate Company, a career she pursued until the birth of their second child. Becoming a stay-at-home mom to Nicholas, Comm ’06, and Samantha allowed Nancy the time to volunteer at their schools, church and community.

Neither has let distance affect their connection with their alma mater. In 2006 they established the Joel and Nancy Andryc Family Endowed Scholarship Fund to support senior students in the Diederich College of Communication interested in pursuing a New York- or LA-based entertainment career after graduation. They also served as the regional chairs for the Alumni Association Endowed Scholarship Initiative. They helped conceive and build the Marquette Entertainment and Communications Alumni group (MECA), an outgrowth of Joel’s longtime participation on the Marquette Alumni Board and as an on-campus student mentor.

Joel collaborated with Acting Provost Kimo Ah Yun to develop the LA Experience, which debuted in 2017. Each spring, six Diederich College students seeking entertainment careers travel to LA for a behind-the-scenes look at the industry that encompasses meeting many of Joel and Nancy’s contacts, including other Marquette alumni who work in the field.

Joel and Nancy express gratitude for help they received from the late Jerry Jaskulski, Sp ’57, a successful television producer who helped them when they first arrived in LA. “Every time I help out a Marquette grad and they thank me,” Joel says, “I tell them they need to remember to do the same when they’re in a position to pay it forward.”

A favorite Marquette memory for Nancy is running down Wisconsin Avenue to celebrate the 1977 NCAA Men’s Basketball Championship win.

Joel fondly remembers Friday afternoons at the Mugrack and programming concerts at The Grill (Yipes!) and the Varsity Theatre (Harry Chapin).