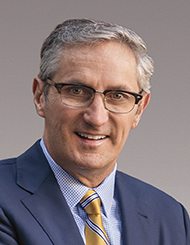 “The guts to try, the heart to care and the resolve to Be The Difference.” It’s a message of inspiration in the Marquette community, a statement to essentially define the Marquette student. And it captures, perfectly, Barry’s approach to a life and career defined by self-made success.

A self-described “poorer than poor” kid from suburban Boston, Barry always had a knack for finding and seizing opportunities, and he decided at a young age to create his own destiny. He worked to pay his way through Boston’s prestigious Cardinal Spellman High School with jobs that included writing for his community newspaper. The reputation of Marquette’s journalism program attracted him, as did the Catholic, Jesuit approach of educating the whole person.

To help pay his Marquette tuition bills, Barry inquired about a tutoring job with the Educational Opportunity Program, which helps low-income and first-generation college students succeed.

“When I found out more, I said, ‘Forget tutoring, I may be eligible for this!’” Barry recalls. “And sure enough, I was. That was the game-changer for me. It took all the financial stress away, and it gave me some of the biggest role models of my life.”

EOP leadership and staff taught him about leadership, empathy and concern for others. They were kind, caring and encouraging. His experience as an EOP participant is something he wants to pay forward, inspiring him to recently pledge significant financial support to its umbrella organization, the Council for Opportunity in Education, to help expand resources for disadvantage students.

After graduating from Marquette, Barry went on to earn a master’s at Massachusetts Institute of Technology. He then landed on the management track at a subsidiary of Colgate-Palmolive, taking evening courses at Boston’s Suffolk Law School. An opportunity to serve as general counsel for McGaw Labs took him to California, where he helped found and take public Total Renal Care (now DaVita). Most recently Barry is an owner and board member of U.S. Renal Care. He also is a graduate of the Harvard Business School’s Advanced Management Program.

He says he’s proud of the opportunities he has helped create for others. “The confidence to make tough and often uncomfortable decisions,” he says, has long been key to his success. Helping others with confidence — inspiring them to see that they can do, be and achieve more — is a way of honoring the many mentors who did the same for him.

The most influential person in Barry’s life has been his mother, “because of her decency, hard work, resilience, reliability and loyalty. She raised five boys on her own and demonstrated class and dignity under fire, adversity and illness.” Her experience with Alzheimer’s inspired Barry’s involvement with the Alzheimer’s Association.