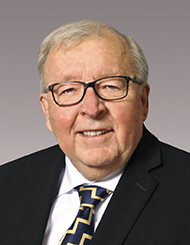 After a successful career in engineering and business management, Rob continues to Be The Difference in retirement — by carrying on a beautiful legacy.

Then, Nancy was diagnosed with breast cancer. Despite chemotherapy and surgery, the disease spread to her brain and spine. She passed away in 2011, after 39 years of marriage.

Rob decided to channel his grief into something positive. He established a fund in Nancy’s name at Froedtert Hospital and the Medical College of Wisconsin to support translational breast cancer research.

He also wanted to honor Nancy by giving back to the institution where they met. “Marquette is where students cross into adulthood,” he says. “They step through its many doors looking for their future, just like us.” He created two endowed scholarships in their names: one for men’s basketball student-athletes — Nancy was a dedicated MUBB fan — and one for students studying electrical engineering. In 2017 he finalized a women’s basketball scholarship and a women’s chorus member scholarship.

Even as he receives the College of Engineering Service Award, Rob continues Nancy’s legacy — she received the same award in 1987.

“It’s very gratifying to receive the very same award she did,” he says. “Of course, she beat me to it, as she did in most things.”