The man who was born blind was thrilled with the healing he experienced from his chance encounter with the man who cured him. He rejoiced in the gift but did not know the giver. Yet he did have the courage to stand up for the one who healed him as the religious authorities tried to debunk the miracle. He even tweaks them by asking whether they might want to meet him. Even his parents even get brought into the interrogation by the authorities. In the end, Jesus seeks out the man and identifies himself as the one who healed him so the man received more than physical sight but insight into the person of Jesus.

As Jesus went along, he saw a man who had been blind from birth. His disciples asked him, “Rabbi, who sinned, this man or his parents, for him to have been born blind. “Neither he nor his parents sinned,” Jesus answered, “He was born blind so that the works of God might be displayed in him.” As long as the day lasts, I must carry out the work of the one who sent me; the night will soon be here when no one can work. As long as I am in the world, I am the light of the world.”

Having said this, he spat on the ground, made a paste with the spittle, put this over the eyes of the blind man and said to him, “Go wash in the Pool of Siloam (a name that means sent).” So the blind man went off and washed himself and came away with his sight restored.

His neighbors and people who earlier had seen him begging said, ”Isn’t this the man who used to sit and beg?” Some said, “Yes, it is the same one. Others said, “No, he only looks like him.” The man himself said, “I am the man.” So they said, “Then how do your eyes come to be open?” “The man called Jesus,” he answered, “made a paste, daubed my eyes with it and said to me, ‘Go wash at Siloam.” So I went and when I washed I could see.” They asked. “Where is he?” “I don’t know,” he answered….

They brought the man who had been blind to the Pharisees. However, the Jews would not believe that man had been blind and gained his sight without first sending for his parents and asking them, “Is this man really your son who you say was born blind? If so, how is it that he is able to see?” His parents answered, “We know he is our son and he was born blind, but we don’t know how it is that he can see now or who opened his eyes. He is old enough let him speak for himself.”

So the Jews again sent for the man and said to him, ”Give glory to God ! For our part, we know that this man is a sinner.” The man answered, “I don’t know if he is a sinner; I only know that I was blind and now I can see… Now here is an as astonishing thing. He has opened my eyes and you don’t know where he comes from. We know that God does not listen to sinners, but God does listen to men who are devout and do his will. Ever since the world began it is unheard of for anyone to open the eyes of a man who was born blind; if this man were not from God, he couldn't do such a thing.” “Are you trying to teach us,” they replied, and you a sinner through and through since you were born.” And they drove him away.

Jesus heard they had driven him away and when he found him, he said to him, “Do you believe in the Son of Man?’ “Sir, the man replied, tell me who it is that I may believe in him.” Jesus said, “You are looking at him; he is speaking to you.” The man said, “Lord, I believe,” and worshipped him.

He came among us as a man to lead mankind from darkness into the light of faith. Through Adam’s fall we were born as slaves of sin, but now through baptism in Christ we are reborn as your adopted children. 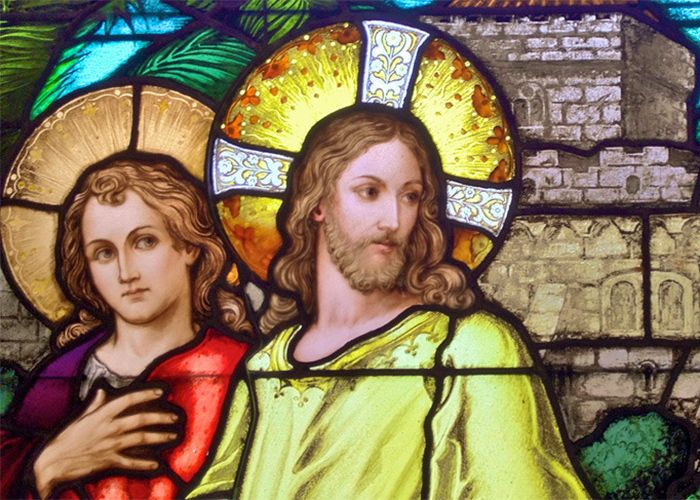