The raising of Lazarus shows the fullness of who Jesus in in his humanity and in his divinity. He shows deep compassion for Mary and Martha on the loss of their brother. And this grief touch his own heart and he weeps openly. He wants to do something. His prayer to his Father precedes the resuscitation of Lazarus. And when Lazarus comes from the tomb, Jesus commands those around to unbind him and set him free. He wanted Lazarus as he does us to have life and life to the fullest. This gospel story does point to the resurrection of Jesus but it points more to the person and the power of Jesus to bring life out of death.

When Jesus arrived in Bethany, he found that Lazarus had already been in the tomb for four days. Now Bethany was near Jerusalem, only about two miles away. And many of the Jews had come to Martha and Mary to comfort them about their brother. When Martha heard that Jesus was coming, she went to meet him; but Mary sat at home. Martha said to Jesus, "Lord, if you had been her, my brother would not have died. But even now I know that whatever you ask of God, God will give you." Jesus said to her, "Your brother will rise." Martha said to him, "I know he will rise, in the resurrection on the last day." Jesus told her, "I am the resurrection and the life, whoever believes in me even if he dies, will live and everyone who lives and believes in me will never die. Do you believe this?" She said to him, "Yes, Lord, I have come to believe that you are the Messiah, the Son of God, the one who is coming into the world."

When she had said this, she went to call her sister, Mary, saying in a low voice, “The Master is here and wants to see you.” Hearing this Mary got up quickly and went to him. Jesus had not yet come into the village, he was still at the place where Martha had met him. When the Jews who were in the house sympathizing with Mary saw her get up quickly and go out, they followed her thinking that she was going to the tomb to weep there.

Mary went to Jesus and as soon as she saw him she threw herself at his feet, saying, “Lord, if you had been here, my brother would not have died.” At the sight of her tears and those of the Jews who followed her, Jesus said in great distress, with a sigh that came straight from his heart, “Where have you put him?” But there were some who remarked, “He opened the eyes of the blind man, could he not have prevented this man’s death?” Jesus reached the tomb: it was a cave with a stone to close the opening. Jesus said, “Take away the stone.” Martha said to him, “Lord, by now he will smell. This is the fourth day.” Jesus replied, “Have I not told you that if you believe, you will see the glory of God.” So they took away the stone. Then Jesus lifted up his eyes and said, “Father, I thank you for hearing my prayer. I know indeed that you always hear me, but I speak for the sake of all those who stand around me so that they may believe that it was you who sent me.”

When he had said this, he cried out in a loud voice, “Lazarus, here. Come out!” The dead man came out, his feet and hands bound with bands of stuff and a cloth around his face. Jesus said to them, “Unbind him, and let him go free.”

As a man like us, Jesus wept for Lazarus his friend. As eternal God, he raised Lazarus from the dead. In his love for us all, Christ gives us the sacraments to lift us up to everlasting life. 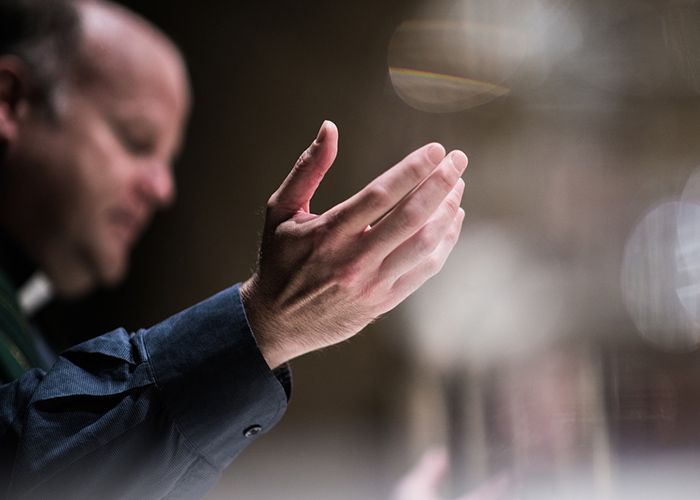