Special awards and fellowships are given annually to graduate students in our programs in recognition of scholarship and leadership. 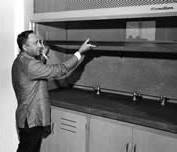 Dr. Raymond Bournique was a professor of analytical chemistry who served as the department chairperson in the 1960s. The Bournique Award, established by the family of Dr. Bournique, is given annually to a graduate student whose performance in graduate research has been judged by the faculty to be outstanding. Each student who gives a satisfactory research meeting presentation during the academic year is automatically nominated for the award. The major criteria include the quality and quantity of the student's research, as well as the quality of the research meeting presentation. A small stipend is given to the award recipient.

The Clifford Haymaker Fellowship was established through the generosity of Professor John J. Eisch, PhD, and his wife, Joan S. Eisch. The Haymaker Fellowship is awarded annually to a graduate student whose performance in teaching has been judged by the faculty to be singularly outstanding. A small stipend is given to the award recipient.

Dr. Clifford R. Haymaker was a distinguished alumnus and faculty member of Marquette University. Born sightless in Milwaukee in 1907, he made his way through school with sighted tutors, and graduated from Marquette University with the highest honors before obtaining his PhD from Marquette University in 1938 with the dissertation, "The Chemistry of Atomic Nuclei." He gave lectures at Marquette on all levels of organic chemistry with the aid of student scribes from 1938 to 1968. He retired with the rank of professor and the warm regard of his many grateful students.

The Eisch Fellowship was established through the generosity of Professor John J. Eisch, PhD, and his wife, Joan S. Eisch (BS in Nursing, Marquette). The Eisch Fellowship is an academic-year research fellowship that is awarded to a graduate student whose performance in graduate research has been judged by the faculty to be outstanding.

Professor John J. Eisch is a native of Milwaukee, Wisconsin and a 1952 graduate of Marquette University with a BS degree (summa cum laude) in chemistry. He received the PhD degree in organic chemistry from Iowa State University, working under the direction of Professor Henry Gilman, an internationally renowned organometallic chemist. Upon completing his PhD studies in 1956, Dr. Eisch received a postdoctoral fellowship from the Union Carbide Corporation to study with Professor Karl Ziegler at the Max-Planck-Institut für Kohlenforschung, Mülheim (Ruhr), Germany. Ziegler, along with Giulio Natta, received the Nobel Prize in Chemistry in 1963 for discovering versatile catalysts for the stereoselective polymerization of olefins, diolefins and acetylenes.

Following a five-month stay at the European Research Associates Laboratory in Brussels, Belgium, Eisch began his academic career in 1957 as Assistant Professor of Chemistry at St. Louis University. As his career progressed, Dr. Eisch held positions successively at the University of Michigan and the Catholic University of America, where he was Ordinary Professor of Chemistry and Department Head from 1966 until 1972. He then joined the faculty of the State University of New York (SUNY) at Binghamton as Department Chair in 1972. In 1983, he was named Distinguished Professor, a SUNY-wide honor. Eisch's extensive research career in the field of organometallic research has received many distinctions, including a traveling lecture fellowship from the Japan Society for the Promotion of Science; the Alexander von Humboldt Senior Scientist Research Award, Universität München, Germany (1993-1996 and again in 2005-2006); the first Henry Gilman Research Award, Iowa State University (1995); and the Doctor of Science degree, honoris causa, from Marquette University (2002). To date, he has mentored more than 100 doctoral students and postdoctoral associates, 30 master's students and some 70 undergraduate assistants, in addition to having taught undergraduate and graduate courses in organic and organometallic chemistry. He has published two monographs and four edited volumes in organometallic chemistry, as well as over 390 research publications, patents and reviews.

Recently, Dr. Eisch published his reminiscences as postdoctoral fellow with Karl Ziegler and as a young academic in the invited article, "Fifty Years of Ziegler-Natta Polymerization: From Serendipity to Science. A Personal Account," in Organometallics, 2012, 31, 4917-4932, which was one of the journal's most frequently downloaded articles in 2012.

The O'Brien Fellowship was established through the generosity of the Denis J. O'Brien Fund. It is a 12-month research assistantship that is awarded to a PhD student who has completed all coursework and been advanced to candidacy.

The American Institute of Chemists (AIC) Graduate and Postdoctoral awards are given annually to scholars in the department for achievement, leadership and professional promise. Recent award winners include: 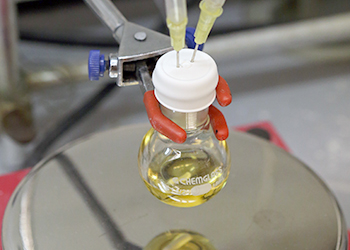