At its most basic, the rosary consists of five decades of Hail Marys (a decade means a group of ten), with each decade preceded by one Our Father and followed by one Glory Be to the Father. One chooses to recite the Joyful, Luminous, Sorrowful, or Glorious mysteries, and before each decade, one states the mystery to be used for prayerful reflection. Even before starting the decades, however, one says a few preliminary prayers, corresponding to the crucifix and four beads.

How does one use all those beads? Suppose one were to pray the Joyful Mysteries: One would proceed in the following way. As you recite each of the prayers listed below, move your fingers forward to the next bead or gap in the rosary.

Crucifix: The Apostles' Creed
Separate bead: Our Father
3 Beads: 3 Hail Marys, followed by the
Glory Be to the Father

For the First Decade

Gap: The Annunciation of the Angel Gabriel to Mary
Separate Bead: Our Father
10 Beads: 10 Hail Marys
Gap: Glory Be to the Father

This sequence is repeated for each of the following four decades. The only change is the mystery that one proclaims at the beginning of each decade. For example, the third Joyful Mystery is The Birth of Jesus in Bethlehem of Judea. After one completes the final Glory Be to the Father of the fifth mystery (The Finding of Jesus in the Temple), one recites the Hail, Holy Queen, which completes the rosary.

All the prayers needed to say the rosary are linked on this page. 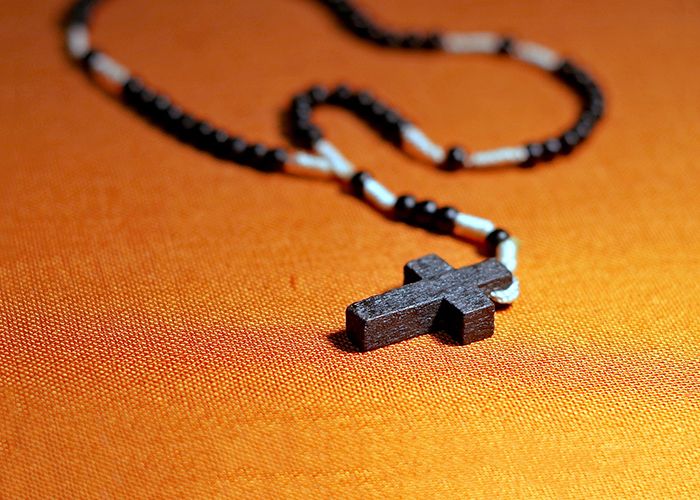 Life of St. Ignatius Series: Video 5 During the Ignatian Year, we celebrate the 500th anniversary of St. Ignatius’ cannonball moment, forever changing his life.
An Ignatian Friendship  Rev. Jim Pribek, S.J., assistant vice president for Mission and Ministry, reflects on the fall 2021 issue of Conversations Magazine and the importance of developing real friendships.