Office of the President

Marquette.edu // Office of the President //

Dr. Michael R. Lovell is Marquette University’s 24th president, serving since 2014. Under his guidance, Marquette focuses on innovation, entrepreneurship, and community renewal and development — all consistent with the university’s Catholic, Jesuit mission.

President Lovell and his leadership team are navigating Marquette through a pivotal time for higher education. Serving as a foundation for Marquette’s future is its strategic plan, Beyond Boundaries, the implementation of which is being led by President Lovell. The university has transformed the Strategic Innovation Fund, unveiled by President Lovell in 2014, into the two-track Marquette Impact Challenge. It continues to cultivate and fund innovative ideas from students, faculty and staff with a desire to involve community organizations. It has further expanded the President’s Challenge track to encourage community-focused responses to timely, pressing issues.

Working with business and community leaders in Marquette’s neighborhood, President Lovell helped create the Near West Side Partners, a nonprofit focused on strengthening economic development, housing, neighborhood identity and safety. Together with his wife, Amy, President Lovell co-founded Scaling Wellness in Milwaukee (SWIM), a community-wide effort addressing the impacts of generational trauma. He also played a key role in launching several other important initiatives in Milwaukee, including the Midwest Energy Research Consortium, The Commons, Scale-Up Milwaukee, The Water Council and the Northwestern Mutual Data Science Institute.

Presently, President Lovell serves on the boards of Children’s Wisconsin, Milwaukee Film, the Greater Milwaukee Committee, the Association of Jesuit Colleges and Universities, the Fund for Wisconsin Scholars and the Big East Conference. He is a member of the executive committees of The Water Council and the Higher Education Regional Alliance. President Lovell serves as chair of the board for the Wisconsin Association of Independent Colleges and Universities. He is also a member of the Council on Competitiveness and co-chairs its University Leadership Forum.

President Lovell holds three mechanical engineering degrees including a doctorate from the University of Pittsburgh. He has received awards from the National Science Foundation, Society of Manufacturing Engineers (SME) and numerous other organizations; is a fellow of the American Society of Mechanical Engineers and National Academy of Inventors; and holds U.S. and global patents. 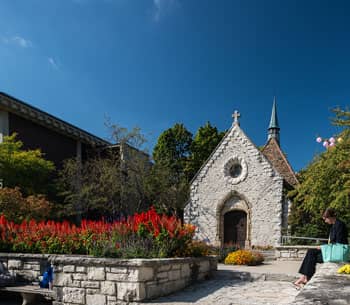 Dr. Michael R. Lovell is the 24th president of Marquette University. A distinguished scholar, researcher, educator and leader, President Lovell holds three academic degrees in mechanical engineering, including a doctorate from the University of Pittsburgh.

Thank you for your interest in having President Lovell attend your upcoming event. Dr. Lovell attends as many university events as possible. To submit your request, please fill out the request form completely and email it to requestpresident@marquette.edu. We will respond to each inquiry as soon as possible. Please call the Office of the President at (414) 288-7223 with any questions or concerns. Thank you!

To report another problem with the president or leadership websites, please contact jennifer.staab@marquette.edu.