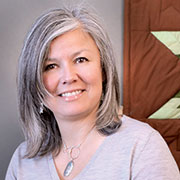 Jacqueline Schram, director of public affairs and special assistant for Native American affairs, has made it her life’s mission to open the door of higher education to Native communities. To do this, Schram has followed the seven traditional teachings of the Anishinaabe, her people, that were given to them by the Creator. These are Bravery, Love, Honesty, Humility, Wisdom, Respect and Truth.

Schram has already achieved so much toward her goal in her 10 years at Marquette. To bring the Marquette and Milwaukee Indian communities together, she created “If These Walls Could Talk: North American Indian Boarding Schools or a Ruse for Cultural Extermination,” as a litmus test to see if there was an interest in Native issues on campus. The interest was evident at a recent Mission Week 2018 event where Schram’s father, a survivor of the Indian boarding school system in Canada, addressed a large crowd.

“Jacqueline’s commitment to creating a deeper, campuswide understanding of the history of Native Americans and their relationship with Marquette and Milwaukee has led her to be widely viewed as our expert on campus for this subject,” Dr. Dan Bergen, executive director of the Office of Community Engagement, notes in his nomination. “She co-leads the Committee on Recruitment and Retention of Native American and Underrepresented Minority Students and has been critical in the launch of the Powless Scholarship for Native American students.”

In 2017 Schram’s dreams became a reality when the University Council on Native American Affairs was created at Marquette. “The work the council will do will revolve around the mission to strengthen the connection between the university and Native American community through culturally competent practices,” Schram says.