The Père Marquette Discovery Award is Marquette University's highest honor. In the spirit of the discoveries of Père Jacques Marquette, the award honors those who achieve an extraordinary breakthrough that adds to human knowledge or the advancement of humanity.

Past recipients of the Père Marquette Discovery Award include:

Winner of the 1984 Nobel Peace Prize, the Most Rev. Desmond Mpilo Tutu visited campus as part of Mission Week 2003. In awarding the Peace Prize, the chair of the Norwegian Nobel Committee said: "Desmond Tutu has shown that to campaign for peace is not a question of silent acceptance, but rather of arousing consciences and a sense of indignation, strengthening the will, and inspiring the human spirit so that it recognizes both its own value and its power of victory."

"Mother Teresa has discovered God in the poorest of the poor," said Rev. John P. Raynor, S.J., then president of Marquette. "Through her life and example, people of every country in the world have discovered the light of God shines again in our time. Like Père Marquette, Mother Teresa does indeed map the unknown regions of man's need to give and receive Christ's charity." In response, Mother Teresa said, "I am most unworthy to receive this honor — this award. But I receive it for the glory of God and in the name of our poor people — the unwanted, unloved, uncared for."

"It is eminently fitting," said President John P. Raynor, S.J., "that the Père Marquette Discovery medal be presented to one whose achievements, like those of Father Marquette, bear the mark of explorer and discoverer-explorer of the uncharted regions of man's need for commitment to and communication with his God if his life is to have meaning and purpose, discoverer of new dimensions of the marvelous phenomenon which is man. Father Rahner has, indeed, pushed back the horizons of his understanding of the mysterious relationship between Creator and created, between Him who is our final destiny and him who struggles toward it."

Presented to Neil A. Armstrong, Edwin E. Aldrin, Jr., and Michael Collins. "In perpetuating the memory of Father Marquette as one of history's greatest explorers and discoverers," President John P. Raynor, S.J., said, "it is most fitting that the first Père Marquette Discovery Medals be presented to the heroic crew of Apollo 11. Like Father Marquette, the Apollo 11 astronauts share in full measure the qualities which distinguish all great explorers — a questing spirit, uniqueness in deed and a consuming dedication to the betterment of civilization." 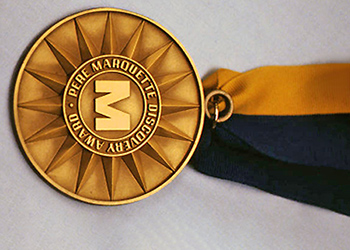