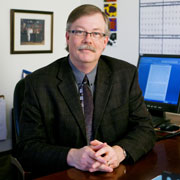 Chair and professor of history

Like many boys who grew up in the 1960s during the Civil War centennial, Dr. James Marten spent countless hours playing war and dressed up as a soldier for Halloween more years than not. It should come as no surprise then that Marten associates his research on Civil War children with some of his fondest memories growing up.

"My first love as a historian was the Civil War," Marten said. "And, like many baby boomers, as an adult I'm a little obsessed with thinking about childhood — my own and my children's — which clearly played a role in my evolution into being a historian of children and youth."

For his leadership, research and scholarship, Marquette awarded Marten, chair and professor of history, the 2010 Lawrence G. Haggerty Award for Research Excellence. The annual award recognizes a faculty member who has demonstrated scholarly distinction and an all-encompassing belief in excellence. The award includes a gift of $5,000.

"In almost a quarter of a century of service at Marquette, Jim has embodied the university's ideal of the scholar-teacher. He helped launch a field of study about American childhood and youth during the Civil War, while maintaining a full teaching load, serving as the chair of the Department of History and directing seven doctoral dissertations," said President Robert A. Wild, S.J.

Marten believes it's too easy for individuals to view children as passive observers and victims of their times. That couldn't be further from the truth, based on his research. According to Marten, children are important actors in history and can provide important insights into the periods and events they lived in.

In 1999, Marten's book The Children's Civil War was selected by Choice Magazine as an Outstanding Academic Book of the year and helped establish Marten as an important interpreter of the social history of the Civil War period. He has written, edited or co-edited 13 books and has two more books in progress. His monograph Sing Not War: Civil War Veterans in Guilded Age America will be published in 2011, and his edited work, Children and Youth During the Civil War Era, is nearing completion and under contract with New York University Press.

Marten's contributions to the field go beyond his own work and publications. He was a co-founder of the Society for the History of Children and Youth, which hosted its first conference at Marquette in 2001. The society now counts nearly 300 members from more than 20 countries and publishes a triennial journal. He also serves as senior co-editor of the six-volume anthology The Cultural History of Children and the Family, coordinating 72 volume editors and authors from four continents and 13 countries and co-editing one of the volumes. Marten believes this work is as important as his personal writing, allowing him to bring in and support junior scholars in the field, as well as help refine and bring clarity to the field.

"I've really been fortunate to find a research field with room to grow and find a voice to articulate why it was important for us to understand the place of children in history," he said.