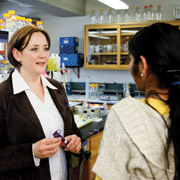 Thanks to her parents, especially her mother, Dr. Rosemary Stuart became intimately familiar with the teacher-scholar model long before she came to Marquette. While her parents were both professors in Dublin, Ireland, Stuart’s mother, Mary Rose Stuart, often involved her five children in activities with her university students.

Stuart’s mother, a biological sciences professor who studied fungi (yeasts, molds and mushrooms), often took her children along on field trips. “We’d be out in the forest gathering mushrooms alongside her students, which was a fantastic experience,” Stuart recalled. “Then we’d go back to her lab and identify the specimens with her students. Just seeing her interact with her students and how much they respected her, and how much she respected them, really opened my eyes, as a kid, to a completely different side of my mother.”

Mitochondria are the part of cells that produce energy, which comes in the form of adenosine triphosphate, or ATP, the “energy currency.” Enzymes — small, molecular machines — work together to produce the ATP molecule. Stuart’s research is focused on two aspects of this process — how those enzymes are assembled in the mitochondria, and how their level of work is regulated.

How efficiently that molecular process is working is critical, according to Stuart. If mitochondria are not working properly and not enough ATP is being produced, it will limit the energy output of the body. If these enzymes are too active or unregulated, toxic byproducts can result.

Stuart conducts her research with yeast cells because of their simplicity and ease of use. Yet, processes observed in single-celled yeast can still be applied to complex organisms, including humans.

“We’re focusing on when the system is working optimally,” said Stuart. “What we are discovering in understanding the fundamentals in a healthy situation, we can use to find out what’s going on in a diseased model.”

The knowledge that she is generating can then be used by other researchers to translate into the treatment of diseases and medical conditions. Some heart and neurological conditions in humans, for example, can be traced back to mitochondrial defects.

“I love the adrenaline rush of trying to discover something — coming up with a model, making predictions, testing them and hoping to be right,” said Stuart. “When you start collecting data that supports your hypothesis, it’s a thrill.”

And she shares that thrill with her students. “The educational aspect of research is incredibly important to me,” she said. “I love working alongside young scientists, helping them learn scientific discovery. I try to use the research setting as an educational opportunity for students and open their eyes to what they’ve read in a textbook. Helping students design an experiment, get data, evaluate it and learn the significance of what they’ve discovered is a wonderful teaching opportunity.