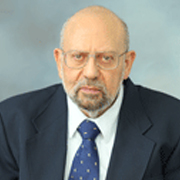 Professor of Electrical and Computer Engineering

As a world-renowned authority and author in the modeling, analysis and design of electric machines and drives, Demerdash’s research and work has improved the reliability of electric motors that could increase survivability in key moments by preventing power failures. Demerdash’s work to improve the prediction of propeller motor failure could mean the difference between life and death for submarine personnel, or during surgery in a hospital in the case of a backup generator failure after a power outage.

Demerdash also has worked to improve the efficiency of motors, which has helped to cut energy usage in appliances and other devices worldwide. These improvements are being used in electric hybrid vehicles, allowing them a way to “limp home” if there is an issue.

Demerdash is most proud of his work as a professor and has taught at Marquette for more than twenty years. “Nothing gives me more joy than mentoring people, watching them complete their education and become successful, whether it’s in industry or academia,” Demerdash said.

Demerdash received a bachelor’s degree from Cairo University in 1964 and by 1971 he had earned his master’s and Ph.D. from the University of Pittsburgh.