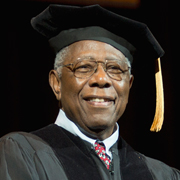 Henry L. Aaron is one of the greatest baseball players of all time. Born in Mobile, Alabama, he grew up in a poor family, picking cotton on a farm. Since his family couldn’t afford baseball equipment, he practiced by hitting bottle caps with sticks, and made his own bats and balls out of materials he found on the streets.

At age 18, he helped the Indianapolis Clowns win the 1952 Negro League World Series. The Milwaukee Braves signed him to a Major League Baseball (MLB) contract in 1952, and he began playing in the minor leagues. He was one of the first five African Americans to play in the league. When traveling in the South, Mr. Aaron experienced discrimination and was often separated from his teammates due to Jim Crow laws.

After playing in the minor leagues, Mr. Aaron made his major league debut in 1954 with the Milwaukee Braves, beginning a remarkable 23 season career. He made the All-Star team every year from 1955 to 1975, and won three Gold Glove Awards. He won the National League Most Valuable Player Award in 1957, the same year that the Braves won the World Series. His consistency helped him break many records. He holds the MLB records for the most career runs batted in (2,297) and the most career extra base hits (1,477). He is also in the top five for career hits with 3,771 and runs with 2,174.

As he approached Babe Ruth’s home run record of 714, Mr. Aaron was the recipient of death threats and hate mail from people who did not want to see an African American man break Ruth’s record. Mr. Aaron received an outpouring of public support in response to the bigotry. On April 8, 1974, Mr. Aaron hit career home run number 715, breaking the record.

The Atlanta Braves traded Mr. Aaron to the Milwaukee Brewers in 1974, and he finished his baseball career in Milwaukee. He hit his 755th and final home run before a home crowd at Milwaukee County Stadium in 1976.

Since his retirement from professional baseball, Mr. Aaron has given back to society for more than 30 years. With his wife Billye, he established the Chasing the Dream Foundation to help children between the ages of nine and 12 realize their dreams as he realized his. The foundation provides grants to children to enable them to pursue advanced study in music, art, writing, dance, and sports.

Among his other charitable endeavors is service on the Board of Governors for the Boys & Girls Clubs of America and the Board of Councilors of the Carter Center.

He was inducted into the Baseball Hall of Fame in 1982. Since 1980 he has served in the front office of the Atlanta Braves, with the title of Senior Vice President since 1989.

In 1999 MLB announced the Hank Aaron Award honoring the best overall offensive performer in the American and National Leagues. It has the distinction of being the first award named after a player who is still living.

In 2002 Mr. Aaron received the Presidential Medal of Freedom, the nation’s highest civilian honor. His autobiography, If I Had a Hammer, was published in 1990. Statues of Mr. Aaron stand outside the entrances of both Turner Field in Atlanta and Miller Park in Milwaukee. In 2006 a recreational trail connecting Miller Park with Lake Michigan was dedicated as the Hank Aaron State Trail.

Because of his achievements in baseball and as a humanitarian, Reverend President, I hereby recommend Henry L. Aaron for the Marquette University degree of Doctor of Humane Letters, honoris causa.