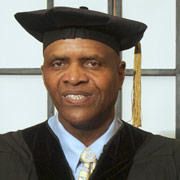 Honorary Degree: Doctor of Humane Letters
Conferred on Will Allen

Will Allen is the Founder and Chief Executive Officer of Growing Power, Inc., an organization dedicated to transforming communities through sustainable food systems that are equitable and ecologically sound. Identified by many as an urban farmer, Mr. Allen works tirelessly to help ensure individuals, especially those in low-income urban areas, have access to healthy, safe, and affordable food sources regardless of their economic circumstances.

Since 1995 Mr. Allen and Growing Power have worked to grow food, to grow minds, and to grow communities. People from around the world come to Growing Power’s headquarters in Milwaukee for tours, workshops, and hands-on demonstrations where they learn farming techniques that are simple and accessible. Visitors learn about everything from raising vegetables and livestock to efficient and effective composting processes that can be replicated on rooftops and porches from Detroit to Ghana, Africa. While Mr. Allen believes people are never too old to learn, he pays special attention to educating youth, an important part of Growing Power’s mission accomplished through after school and job training programs.

Recognizing that not everyone wants to become a community farmer, Mr. Allen nonetheless works to ensure that people have access to nutritious and affordable food sources. This is done through the Rainbow Farmer’s Cooperative, using multiple sites to distribute produce grown on Growing Power farms and the farms of over 300 small, family farms across the United States. Allen also started a year-round food security farm-to-city market basket program that provides nutritious foods to low-income families at a reduced rate.

A graduate of the University of Miami, Mr. Allen is widely considered the leading authority in the burgeoning field of urban agriculture. Prior to his work in this area, Mr. Allen was a professional basketball player and highly successful corporate executive. He left the corporate world behind to pursue his love for farming and at the same time fight for social justice in ways no one thought possible. A true social entrepreneur, Mr. Allen believes it’s important to change the system so everyone has access to high quality food sources.

Mr. Allen received a Ford Foundation Leadership grant in 2005 for his extraordinary efforts to bring safe and affordable food to low-income communities. In 2008 he was honored with a MacArthur Foundation Fellowship “Genius Grant” given to him for his ongoing exceptional creative work and for his originality, insight and potential to make a difference. In 2010 Mr. Allen helped First Lady Michelle Obama launch “Let’s Move!” a program aimed at reversing childhood obesity in America. Also in 2010 Time Magazine named him one of the 100 most influential people in the world.

Because of his substantial and ongoing commitment to changing lives, one community at a time, Reverend President, I hereby recommend Will Allen for the Marquette University degree of Doctor of Humane Letters, honoris causa.