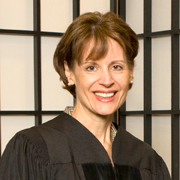 Joan Biskupic is a biographer and veteran journalist, and is one of the nation’s most respected and astute observers of the United States Supreme Court.

Named by National Public Radio (NPR) as a top five current affairs book of 2009, American Original: The Life and Constitution of Supreme Court Justice Antonin Scalia, is an example of Biskupic’s enlightening, well-researched, comprehensive, and careful reporting. Her 2005 book, Sandra Day O’Conner: How the First Woman on the Supreme Court Became Its Most Influential Justice, established Biskupic as an insightful biographer about the Supreme Court.

Her education, experience, and curiosity about people uniquely qualify Ms. Biskupic to explain what goes on inside the third branch of our federal government. A Chicago native, she earned a bachelor’s degree in journalism from Marquette University in 1978, a master’s in English and Renaissance drama from the University of Oklahoma in 1986, and a law degree from Georgetown University Law Center in 1993 — both advanced degrees earned while working full time as a journalist.

For 20 years Ms. Biskupic has reported on the Supreme Court for influential news organizations, first as a legal affairs reporter for Congressional Quarterly Weekly Report, focusing on the work of the Senate and House Judiciary Committees. She earned the Everett McKinley Dirksen Award for Distinguished Reporting of Congress for her coverage of the Clarence Thomas nomination in 1991.

For eight years beginning in 1992 she was Supreme Court correspondent for The Washington Post, writing more than 1,000 articles and co-authoring two Pulitzer Prize-nominated series: “Sentencing by the Numbers” and “The Secrets of the Marshall Papers.” Ms. Biskupic initiated a monthly feature, “Full Court Press,” and established one of the Post’s first weekly online conversations, “Holding Court.”

In 1997 Biskupic and co-author Elder Witt wrote the two-volume Congressional Quarterly’s Guide to the U.S. Supreme Court, and related books on the court and individual rights, the power of government, and the work of the court. She was series originator and author of the first three volumes of The Supreme Court Yearbook, a Congressional Quarterly Press publication that began in 1989.

Since 2000 Biskupic has been legal affairs correspondent for USA Today, where she is the author of frequent cover stories focused on the internal workings of the court and the consequences of court rulings in American life.

She has had three public policy fellowships for work on judicial biographies at the Woodrow Wilson International Center for Scholars in Washington, D.C., is a regular panelist on PBS’s Washington Week with Gwen Ifill and NPR’s Diane Rehm Show and is an occasional guest on NBC’s Today Show, ABC’s Good Morning America and Nightline, and CBS’s Face the Nation. Ms. Biskupic is a frequent speaker on law school campuses and before civic and government groups.

Because of her exceptional contributions to American understanding of the Supreme Court and the laws of the nation, and her eloquent and engaging writing that makes complex issues and ideas about the law and the court accessible to all citizens, Reverend President, I hereby recommend Joan Biskupic for the Marquette University degree of Doctor of Laws, honoris causa.