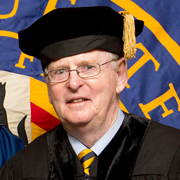 T. Michael Bolger is one of Milwaukee’s most prominent civic leaders and a national authority on health care law. He served as the Medical College of Wisconsin’s (MCW) President and Chief Executive Officer from 1990 to 2010.

During Mr. Bolger’s 20-year tenure as President and CEO, the Medical College experienced significant growth in its operating budget, externally funded research, and endowment. In addition, the number of faculty physicians increased from 400 to 1,200.

Mr. Bolger also led the college’s national fundraising activities. Prior to Mr. Bolger’s tenure as president, philanthropy at MCW was negligible. Under his leadership, MCW received more than $240 million in private donations. During his term, he spearheaded two capital campaigns that raised a combined total of more than $200 million. MCW constructed approximately $200 million in new facilities during Mr. Bolger’s tenure as President, including more than 500,000 square feet of research and teaching space.

When Mr. Bolger learned about the lack of minority applicants to MCW, he helped found the Milwaukee Academy of Science to provide a direct pipeline for first generation students to achieve their dream of attending medical school.

Mr. Bolger served as national Chairman of the Association of Academic Health Centers, a national organization of CEOs of more than 100 medical schools and academic medical centers throughout the United States, in 2005.

Before being named President of MCW, Mr. Bolger was a partner in the law firm of Quarles & Brady. He served as General Counsel to MCW and provided the legal guidance that helped create the Milwaukee Regional Medical Center in the 1970s.

He has served on more than 20 civic boards including the Greater Milwaukee Committee; the Milwaukee Repertory Theater, where he is credited with spearheading the construction and financing of the Rep’s theater complex; and the Marquette University Alumni Association, where he served as President of the National Board of the Association, was named Alumnus of the Year, and co-chaired the campaign to build the Alumni Memorial Union. He is the recipient of numerous awards from organizations including the Milwaukee Press Club, the Archdiocese of Milwaukee, the Milwaukee Foundation, the Wisconsin Medical Society, and MCW student government which honored him with the first Standing Ovation Award for service to students.

Mr. Bolger received his B.A. in philosophy from Marquette University. He earned his M.A. and Ph.L. degrees in Philosophy from Saint Louis University, and his J.D. degree with honors from the Northwestern University Law School.

Because of his unwavering commitment to medical education and his instrumental role as a leader in the Milwaukee community, Reverend President, I hereby recommend T. Michael Bolger for the Marquette University degree of Doctor of Laws, honoris causa.