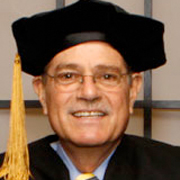 Candidate presented by: Dr. Stan Jaskolski, OPUS Dean of the College of Engineering

The Honorable Frank Busalacchi has served as the State of Wisconsin Secretary of Transportation since 2003. He leads one of the largest state agencies with more than 3,300 employees and dozens of satellite offices. The Wisconsin Department of Transportation’s annual budget of nearly $3 billion includes support for all modes of transportation, including state highways, local roads, railroads, public transit systems, airports, harbors, and bicycle and pedestrian facilities. The department serves 50,000 people each day through the Division of Motor Vehicles, and the Wisconsin State Patrol enforces laws and aids motorists throughout the state.

Secretary Busalacchi led the state’s efforts to rebuild the Marquette Interchange in downtown Milwaukee. This $810 million project was the largest highway construction job in Wisconsin history and completed safely, ahead of schedule, under budget, and with community input invited and encouraged.

Secretary Busalacchi plays a leading role in national passenger rail issues. In 2005, he accepted the post as chair of the States for Passenger Rail Coalition, an alliance with representation from more than 30 states calling for expanded federal support of intercity passenger rail. He has testified to Congress about the importance of passenger rail and is working to improve existing Amtrak service as well as plan for new high-speed rail service in Wisconsin.

Secretary Busalacchi also has served as a member of the National Surface Transportation Policy and Revenue Study Commission, which studied the condition of the nation’s surface transportation system, identified needs and developed financing recommendations. The commission submitted its report and recommendations to Congress in 2008.

Secretary Busalacchi has a longtime commitment to improving Wisconsin. He was president of the Summerfest Board of Directors and chair of the negotiating committee responsible for the lease between Milwaukee World Festivals and the City of Milwaukee. He also served as the construction committee chair for the Miller Park construction project. He was a member of the Southeast Wisconsin Regional Planning Commission Advisory Committee for the southeast freeway study and a member of the Greater Milwaukee Committee.

Because of his distinguished commitment to public service and to the people of the State of Wisconsin, Reverend President, I hereby recommend the Honorable Frank Busalacchi for the Marquette University degree of Doctor of Laws, honoris causa.