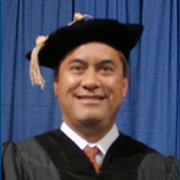 The Honorable Felix Perez Camacho was elected as the sixth Governor of Guam in 2002. As Governor, his goals include achieving greater self-sufficiency for the island; fostering stronger industries and developing new ones to bring about prosperity without compromising the values of the island; fixing water, power, schools, and health systems and improving the quality of life for Guam’s people; defining the framework of the government and the services it delivers with a commitment to excellence; and fully embracing Guam’s role in national defense and as a leading island in the Pacific region.

Governor Camacho’s current office is one in a long line of positions of public service. Prior to being elected Governor, he served as a Senator in the Guam legislature, rising to the position of Majority Whip and Assistant Majority Leader. During his legislative tenure, he served as Chairman of the Committee on Tourism, Transportation, and Economic Development; and he was an active policymaker in numerous areas. Prior to being elected to office, he served Guam as the Deputy Chief of the Public Utility Agency and as Executive Director of the Civil Service Commission.

Governor Camacho is a 1980 graduate of Marquette University’s College of Business Administration. After completing his studies at Marquette, he worked for the Pacific Financial Corporation and IBM Corporation before beginning his career in public service.

Throughout his career, Governor Camacho has been a tireless promoter of Marquette University in his native Guam. As a result of his efforts, dozens of talented Guamanian students have traveled halfway around the globe to pursue their studies at Marquette. Marquette is truly grateful for Governor Camacho’s work in helping us to broaden and diversify our student population.

Governor Camacho is involved with numerous civic organizations, including the Knights of Columbus. He was honored as one of the Outstanding Young Men of America and received the Pacific Jaycees Young Outstanding Person award.

He is the son of the late Governor Carlos G. Camacho, who was the first elected Governor of Guam, and Lourdes Perez Camacho.