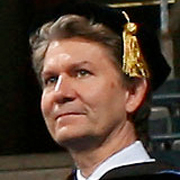 Andreas Delfs is widely admired by both audiences and professional musicians as one of the world’s most visionary, exciting, and courageous conductors.

Born in Flensburg, Germany, Delfs began the study of piano and music theory at age five and joined the roster of the Flensburg Stadttheater as conductor and composer at age 17. He graduated from the Hamburg Conservatory in 1981 and received his master’s degree from The Juilliard School in 1984.

Those contributions include a 1999 trip with the orchestra to Cuba, the first performance by a major American orchestra in that country in 37 years, and his leadership of a program for introducing classical music to young people in Milwaukee’s schools that is regarded as one of the most comprehensive and successful in the nation, reaching 40,000 young people each year. Last fall, Maestro Delfs began a new term as principal conductor of the Honolulu Symphony.

Over the years, Maestro Delfs has worked tirelessly and imaginatively to connect audiences to both the classical and the contemporary repertoire. Describing his own approach to music programming, he has said that “If there's a little more fantasy, a little more chutzpah in your programming, more times than not, the sparks will fly. It takes a willingness to dare, but you must dare with something you believe in.”

Maestro Delfs is widely recognized to be one of the world’s finest interpreters of the music of Ludwig van Beethoven and Johnannes Brahms. He leads musicians in passionate, heartfelt, and transcendent performances of these works and of the many pieces in his repertoire.

Because of his distinguished career as conductor, musician, educator, and public advocate for the fine arts, Reverend President, I hereby recommend Andres Delfs for the Marquette University Degree of Doctor of Fine Arts, honoris causa.