The Most Reverend Timothy M. Dolan 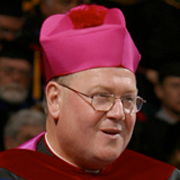 Candidate presented by: John Stollenwerk, member, Board of Trustees

Archbishop Dolan earned a bachelor of arts degree in philosophy from Cardinal Glennon College. He then completed his priestly formation at the Pontifical North American College in Rome where he earned a licentiate in Sacred Theology at the Pontifical University of St. Thomas. He was ordained to the priesthood in 1976 and then served as associate pastor at a parish in the St. Louis area until 1979 when he began studies for a doctorate in American Church History at the Catholic University of America. His doctoral dissertation focused on the life and ministry of the late Archbishop Edwin O'Hara, a founder of the Catholic Biblical Association.

On his return to St. Louis, Archbishop Dolan served in parish ministry from 1983 to 1987, during which time he served as liaison on behalf of the late Archbishop John L. May in the restructuring of the college and theology programs of the archdiocesan seminary system.

In 1987 Archbishop Dolan was appointed to a five-year term as secretary to the Apostolic Nunciature in Washington, D.C. When he returned to St. Louis in 1992, he was appointed vice rector of Kenrick-Glennon Seminary, serving also as director of spiritual formation and professor of church history. He was also an adjunct professor of theology at Saint Louis University.

In 1994 he was appointed rector of the Pontifical North American College in Rome where he served until June 2001. During this period, he also served as a visiting professor of church history at the Pontifical Gregorian University and as a faculty member in the Department of Ecumenical Theology at the Pontifical University of St. Thomas Aquinas. Archbishop Dolan’s capable efforts in the area of seminary education have influenced in a very positive way the life and ministry of a great number of priests who are currently involved in ministry.

Because of his accomplishments as a teacher, priest, bishop, and archbishop and because of his profound commitment in all his work to Catholic teaching and fundamental ethical values, Reverend President, I hereby recommend Timothy M. Dolan for the Marquette University degree of doctor of religious studies, honoris causa.