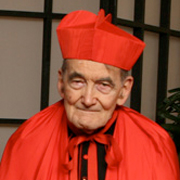 Avery Cardinal Dulles, S.J., is the Laurence J. McGinley Professor of Religion and Society at Fordham University, a position he has held since 1988. An internationally known scholar, he was the first American-born theologian who was not previously a bishop to be named to the College of Cardinals. Pope John Paul II elevated him to that office in 2001. Cardinal Dulles is one of the principal theological interpreters of the Second Vatican Council and a creative and faithful scholar of the longer Catholic theological and creedal tradition. The author of 27 books and more than 700 articles, he has become during the past 45 years one of the most prolific theologians in the United States. He is well-known in Protestant and Jewish as well as Catholic theological centers around the world. Many of his books and a number of his articles have been translated into German, French, Spanish, Portuguese, Italian, Indonesian, Polish, and other foreign languages, making him the 20th century American theologian most widely read outside the United States.

Born in Auburn, New York, the son of John Foster Dulles (Secretary of State under President Dwight Eisenhower) and Janet Pomeroy Avery Dulles, Cardinal Dulles received his early education in New York City, Switzerland, and Connecticut, before graduating summa cum laude from Harvard University in 1940. His senior thesis won the Phi Beta Kappa Prize, an award bestowed only six previous times at Harvard, and was published by Harvard University Press -- the first of his many publications. After graduation he attended Harvard Law School until the outbreak of World War II, when he joined the Navy, was commissioned as a Lieutenant, and became a liaison officer to the French Navy in the joint Allied invasion of Southern France in 1944. While at Harvard Law School he converted to Catholicism, and after the War he joined the Jesuits and was ordained a priest in 1956.

After studying for the priesthood, Cardinal Dulles spent a year in Germany before attending the Gregorian University in Rome, where he earned his doctorate in theology in 1960. He then served as a faculty member at Woodstock College from 1960 to 1974, the premier Jesuit seminary at the time, and at the Catholic University of America from 1974 to 1988. He has also taught as a visiting professor at the Gregorian University, the Catholic University of Leuven, Yale University, Weston Jesuit School of Theology, Union Theological Seminary, Princeton Theological Seminary, and a number of other colleges and seminaries in the United States.

During his long and illustrious career, he has been president of both the Catholic Theological Society of America and the American Theological Society. He has also served on the Vatican’s International Theological Commission, the Advisory Committee to the United States Catholic Conference, the American Bishops’ Committee on Doctrine, and the United States Lutheran/Roman Catholic Dialogue. During the past 65 years he has won numerous awards and received more than 35 honorary doctorates.

Because of his distinguished and prolific career as a theologian, author, educator, and priest, Reverend President, I hereby recommend His Eminence Avery Cardinal Dulles of the Society of Jesus for the Marquette University degree of Doctor of Religious Studies, honoris causa.