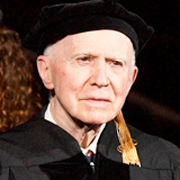 Louis Dupré received his doctoral degree in philosophy at the University of Leuven, where he graduated in 1954 after writing a dissertation on the starting point of Marxist philosophy, for which he was awarded the J.M. Huyghe prize in 1956.

He taught philosophy at Georgetown University until 1972. The following year Professor Dupré was named the T. Lawrason Riggs Professor in Religious Studies at Yale University. His scholarly concentration has been on phenomenology and philosophy of religion, as well as on early modern thought and spiritual theology, and he is considered one of the world’s leading Kierkegaard scholars and is at the forefront of Marxist-Christian dialogue.

Professor Dupré has lectured at several universities in the United States as well as his native Belgium, the Netherlands, Ireland, and Italy. He has written 15 books, edited four, and published some 200 articles in various philosophical and theological journals, collective works and encyclopedias. In recognition of his distinguished scholarship, he was elected a foreign member of the Belgian Royal Academy of Letters, Arts and Sciences, and in 1994 he became a member of the American Academy of Arts and Sciences.

Professor Dupré has been recognized throughout this career as a brilliant lecturer and his scholarly work has been characterized by critical rigor, depth, and wisdom. His abiding interest in the foundations of modern culture and the history of ideas has contributed in substantive ways to contemporary human self-understanding. His provocative studies on the Enlightenment and modernity have served to develop the questions and shape the agenda for future generations of scholars of religious history.

The personal commitment and dedication of Professor Dupré to a life of scholarship have mirrored the ideals of excellence in teaching and research traditionally honored at Marquette University. In his illustrious career he has won numerous awards and received several honorary degrees. In 1997 he received the Aquinas Medal from the American Catholic Philosophical Association. On the occasion of his retirement in 1998, former students and friends presented him with a festschrift entitled Christian Spirituality and the Culture of Modernity; Essays in Conversation with Louis Dupré.

Because of his distinguished career as a philosopher, theologian, inspiring teacher, and prolific author, Reverend President, I hereby recommend Louis Dupré for the Marquette University Degree of Doctor of Religious Studies, honoris causa.