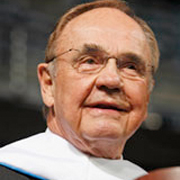 Dick Enberg, an icon of sports broadcasting, is in his 10th year with CBS-TV Sports following 25 years with NBC-TV Sports. He has earned a series of national honors and awards, including 14 Emmy Awards, 15 Sportscaster of the Year Awards, the Ronald Reagan Media Award and the Victor Award for the top sportscaster of the past 40 years. His versatility is reflected in the fact that he is the only person to win a series of national Emmy Awards as a sportscaster, write, and producer. In 2000 he was honored with a national Emmy Award for Lifetime Achievement.

Enberg began his full-time sportscasting career in 1965 in Los Angeles, becoming the radio-TV voice of the California Angels, UCLA basketball and the Los Angeles Rams. Prior to joining NBC in 1975, he was on four occasions named California Sportscaster of the Year. He hosted the long-running national series, “Sports Challenge” and served as co-producer of the Emmy-award winning PBS series, “The Way It Was.” In 1973 Enberg became the first American sportscaster to visit the People’s Republic of China, going there to cover a U.S. vs. China basketball game in Peking.

A native of Armada, Mich., Enberg began broadcasting when he was an undergraduate at Central Michigan University. He earned his master’s and doctoral degrees in Health Science from Indiana University, and prior to his full-time sportscasting career, he was an assistant professor and assistant baseball coach at California State University Northridge. He is currently actively involved in fundraising for higher education and has served on the Board of Directors of the State of California Community Colleges.

Enberg has recently authored Oh My!, his autobiography, as well as a best-selling book directed toward public speakers entitled Dick Enberg’s Humorous Quotes for All Occasions. His one-man play, “Don’t Undress Until You Die: The Wit and Wisdom of Al McGuire,” which premiered at Marquette’s Helfaer Theatre in 2005, has received national acclaim.

Because of his distinguished career as a broadcaster, writer, philosopher, educator and playwright, Reverend President, I hereby recommend Dick Enberg for the Marquette University Degree of Doctor of Letters, honoris causa.