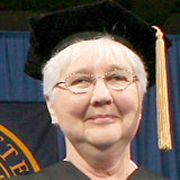 Honorary Degree: Doctor of Laws
Conferred on Margaret A. Farrow

Candidate presented by: Mr. John Stollenwerk, Vice Chair of the Board of Trustees

Faith, reason and service have been inextricably linked throughout the life of former Lieutenant Governor and Marquette alumna, The Honorable Margaret A. Farrow. Ms. Farrow was raised in a life of faith that was strengthened and shaped by the education she received from the Dominican Sisters of St. Catherine High School in Racine, at Rosary College in River Forest, Illinois, and at Marquette University, where she received her bachelor of science degree in political science and education.

It was at Marquette that Ms. Farrow was impressed by the teaching of Jesuit Father John Friedl, whose philosophy course emphasized the virtue of prudence. She credits that course with having a significant influence in her career in public service.

Ms. Farrow worked for a time as a substitute teacher and as a real estate agent before devoting herself to her husband, John, whom she met at a Marquette basketball game, and to their family, which grew to include five sons.

In every elected office she held, Ms. Farrow sought to be a public servant, not a politician, and to seek the most prudent means of serving the public good. Her defense of human life and her ability to listen to new ideas while maintaining a firm commitment to her values were hallmarks of her service. She focused her legislative and executive efforts on education, environmental protection, and the defense of human life. Her faith and education influenced every aspect of her work, particularly her efforts to protect the unborn, advocate for school choice, facilitate school-to-work programs, and open doors to employment.

Ms. Farrow spearheaded two statewide commissions to advance reforms that reduce the cost of government. She played a leadership role in reforming welfare and tax policy to encourage work, saving, investment, innovation, capital formation, labor force productivity, and economic growth. She chaired the Wisconsin Women’s Council for several years and served as a member during her tenure as Lieutenant Governor. Farrow also chaired the Governor’s Work-Based Learning Board and co-chaired the Governor’s Task Force on Invasive Species.

Marquette has previously honored her professional service with the Mary Neville Beilefeld Award from the Association of Marquette University Women and the All-University Alumni Merit Award for Professional Achievement.

Since leaving elected office, Farrow has dedicated her talent and knowledge to several nonprofit activities. She chairs the Priest Review Board for the Archdiocese of Milwaukee. She helped create and now chairs the Waukesha County Action Network (WCAN), an organization of community and business leaders who examine public policy and recommend improvements to remediate problems and advance growth in the greater Waukesha County area and Ms. Farrow also chairs the board of WisconsinEye, a public affairs television network for Wisconsin which began broadcasting in 2007.

Because of her commitment to Catholic and Jesuit values and her career of public service, Reverend President, I hereby recommend the Honorable Margaret A. Farrow for the Marquette University degree of Doctor of Laws, honoris causa.