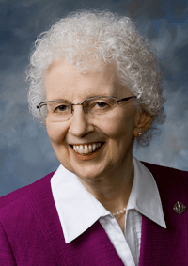 Sister Josephe Marie Flynn of the School Sisters of Notre Dame is the author of Rescuing Regina: The Battle to Save a Friend from Deportation and Death. The book chronicles the true story of Regina Bakala, an asylum seeker from the Democratic Republic of Congo, who was imprisoned by United States Immigration and Customs Enforcement, and the efforts made to save her from deportation after living in the United States for a decade.  Sarnata Reynolds, then Advocacy and Policy Director, Refugee and Migrants’ Rights for Amnesty International, described the book as a “story about inner strength, community power, and healing through selfless bravery.  Sister Josephe . . . leaves her readers with outrage, courage, and the dignity to dig deep, take risks, and fight for human rights.”

A native of Milwaukee, Sister Josephe Marie made first profession of vows in Mequon, Wisconsin in 1961, celebrating her diamond jubilee in 2021. She began her ministry in 1963, teaching at St. Peter in Beaver Dam, Wisconsin, for two years. She went on to teach at Holy Angels, West Bend, Wisconsin, and Messmer High School, Milwaukee. During this period, she earned a bachelor’s degree in art from Mount Mary College in, Milwaukee.

In 1983, she received a master’s degree in theology from St. Mary’s University, Winona, Minnesota. From 1986 to 1994, she served the Archdiocese of Milwaukee as a consultant and archbishop’s liaison to the Catholic charismatic renewal program. After taking a sabbatical, Sister Josephe Marie gave charismatic workshops around the country.

After fifteen years of classroom teaching, Sr. Josephe Marie began a full-time career in spirituality, becoming a national speaker, retreat and spiritual director, as well as an outspoken advocate for immigration reform.  She served as the archdiocesan leader of the Catholic Charismatic Renewal (1987-1994); director of adult and family ministry at St. Mary's in Hales Corners (1996-2005); chair of the Milwaukee Archdiocesan Justice for Immigrants Committee (2006-2016); and a member of the Global Justice and Peace Commission of the School Sisters of Notre Dame.

In 2005, Sister Josephe retired from parish ministry to begin writing Rescuing Regina, which was published in 2011.  Sister Josephe Marie is now serving in prayer and presence at Notre Dame of Elm Grove, Elm Grove, Wisconsin.

Because of her commitment to education, service, the development of female leadership in the church and her work on behalf of immigrants, President Lovell, I hereby recommend Sister Josephe Marie Flynn for the Marquette University degree of Doctor of Religious Studies (D. Rel) honoris causa.