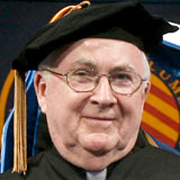 Rev. John P. Foley, S.J., is Chairman of the Cristo Rey Network, a nationwide network of Catholic schools which offer a college preparatory education to the families of immigrants and racial minorities. The goal of Cristo Rey is to prepare students to assume leadership roles in the civic, religious, business, and cultural life of our nation. The hope is that all Cristo Rey graduates reflect these characteristics: open to growth, religious, intellectually competent, loving, committed to justice, and work experienced. This is accomplished through a dual-language curriculum and participation in Cristo Rey’s innovative corporate internship program where students work one day each week at a business.

A Chicago native who entered the Society of Jesus in 1954, Father Foley earned a B.A. in literature from Xavier University in Cincinnati and an M.A. in sociology and an M.Ed., both from Loyola University Chicago. He did his theological studies at the Jesuit seminary in Mexico City. From 1961 to 1995 he served in the Jesuit Province of Peru, working in education and school administration. During that period he was president of two Jesuit high schools in different parts of Peru.

Father Foley returned to Chicago in 1995 to collaborate in establishing Cristo Rey Jesuit High School and the following year became its founding President. During his tenure, he oversaw the effort to establish the school, hired all personnel, spearheaded student recruitment, and oversaw the construction of 150,000 square feet of classroom and recreation space. While at this first Cristo Rey school, Father Foley raised more than $26 million, including a $2 million endowment. More importantly, he established the tradition and spirit of a school that has become a successful national model for urban education. The Cristo Rey schools and Father Foley have been highlighted on “60 Minutes,” in Newsweek Magazine, and in numerous other national media outlets.

After eight years as President of Cristo Rey, Father Foley assumed leadership of the Cristo Rey Network in 2005. This is a national association of Catholic high schools that provide a quality, college preparatory education to urban young people who live in communities with limited educational options. During the 2007-2008 school year, 4,234 students were enrolled in 19 Cristo Rey schools across the United States. Three more schools are scheduled to open later this year, and feasibility studies for potential new schools are underway in four additional cities. The Cristo Rey Network is transforming urban American one step at a time.

The National Catholic Education Association awarded Father Foley the Seton Award in 2007 in recognition of his pioneering and innovative work on behalf of Catholic education. The same year he also received an honorary Doctor of Humanities degree from Georgetown University.

Because of his visionary leadership and commitment to education for all students, Reverend President, I hereby recommend Reverend John P. Foley of the Society of Jesus for the Marquette University Degree of Doctor of Letters, honoris causa.