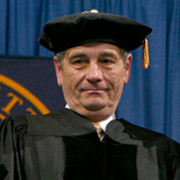 Jerry Kleczka has dedicated his life and career to public service. He has been a tireless supporter of his community, the people of Milwaukee, and Marquette University. First elected to the Wisconsin State Assembly at the age of 24, Congressman Kleczka devoted his life to improving the lives of his constituents, especially those in greatest need: the poor, the elderly, and the disadvantaged.

After serving in the State Assembly, he was elected to the Wisconsin State Senate in 1974 and eventually rose to the prominent positions of Assistant Majority Leader and Chairman of the Joint Finance Committee.

In 1984 he was elected to Congress, representing Wisconsin's 4th District. Over the next twenty-one years, Congressman Kleczka made a mark on a number of areas of national policy, including reforming public housing policy, helping to preserve pension benefits for retirees, and reforming the way Supplemental Security benefits are provided. Congressman Kleczka initiated countless projects and programs that directly benefited Milwaukee businesses, workers, and institutions. He has been an active member of numerous community organizations, including the Hispanic Chamber of Commerce, the Brady Street Area Association, and America's Black Holocaust Museum.

For the later portion of his career, Congressman Kleczka's district included Marquette University. He was directly involved in a number of efforts to help Marquette, and was instrumental in securing funding for the new School of Dentistry facility.

He was a key advocate of establishing Marquette's Les Aspin Center for Government and received its prestigious Founders Award in 1999. During his time in Congress, dozens of students were awarded internships in his office and gained invaluable experience and insight into political processes through his mentoring. Many of these interns became full-time staff members after graduation, and a number have been elected to public office.

After announcing his retirement from Congress in 2004, Congressman Kleczka endowed Marquette with scholarship funds to establish the Jerry Kleczka Internship Program. This generous gift will allow financially needy students the opportunity to intern in state and local government positions in Milwaukee while continuing their studies at Marquette. As a result of this program, future generations of public servants will be able to follow in his footsteps and contribute to the betterment of their communities.

Because of his meritorious public service on behalf of the people of Wisconsin and for his commitment to Marquette University, Congressman Jerry Kleczka is commended for the Marquette degree Doctor of Laws, honoris causa.