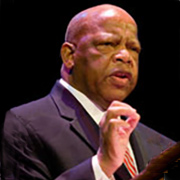 Often called "one of the most courageous persons the Civil Rights Movement ever produced," John Lewis has dedicated his life to protecting human rights, securing civil liberties, and building what he calls "The Beloved Community” in America.

He was born the son of sharecroppers in 1940, outside of Troy, Alabama. He grew up on his family's farm and attended segregated public schools in Pike County, Alabama. As a young boy, he was inspired by the activism surrounding the Montgomery Bus Boycott and the words of the Rev. Martin Luther King Jr., which he heard on radio broadcasts. In those pivotal moments, he made a decision to become a part of the Civil Rights Movement. Ever since, he has remained at the vanguard of progressive social movements and the human rights struggle in the United States. While still a young man, John Lewis became a nationally recognized leader. At the age of 23, he was an architect of and a keynote speaker at the historic March on Washington in August 1963.

Despite more than 40 arrests, physical attacks and serious injuries, John Lewis remains a devoted advocate of the philosophy of nonviolence. Lewis went on to become the Director of the Voter Education Project (VEP). Under his leadership, the VEP transformed the nation's political climate by adding nearly four million minorities to the voter rolls. He was elected to Congress in November 1986 and has served as U.S. Representative of Georgia's Fifth Congressional District since then.

John Lewis is the recipient of numerous awards from imminent national and international institutions, including the highest civilian honor granted by President Barack Obama, the Medal of Freedom, the Lincoln Medal from the historic Ford’s Theatre, the Martin Luther King, Jr. Non-Violent Peace Prize, the President’s Medal of Georgetown University, the NAACP Spingarn Medal, the National Education Association Martin Luther King Jr. Memorial Award, and the only John F. Kennedy "Profile in Courage Award" for Lifetime Achievement ever granted by the John F. Kennedy Library Foundation.

Because of his unparalleled commitment to social justice and the exemplary model he provides to all involved in the struggle, President Lovell, I hereby recommend John Lewis for the Marquette University degree of Doctor of Letters, honoris causa.