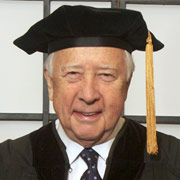 Candidate presented by: Mr. Steve Frieder, Assistant to the President and Corporate Secretary

His books have been praised for their scholarship, their understanding of American life, their “vibrant prose,” and insight into individual character. Mr. McCullough’s most recent book, 1776, the number one New York Times national bestseller in both hardcover and paperback, has been called, “brilliant…powerful,” “a classic,” while his previous work, John Adams, remains one of the most critically acclaimed and widely read American biographies of all time. It is presently in its 82nd printing.

Mr. McCullough’s new book, The Greater Journey: Americans in Paris, will be published on Tuesday. It tells the stirring—and until now, largely untold—story of three generations of talented young Americans who traveled to Paris in the nineteenth century seeking excellence, the ways they were changed, and the ways they changed their country.

A composer creates art by writing music; a painter creates art using oil and canvas; David McCullough creates art with words. His writing is as vivid as the artist’s canvas and as passionate as the composer’s symphony. Writing in The New York Times, critic John Leonard remarked that “David McCullough is incapable of writing a page of bad prose,” a statement with which millions of readers would concur.

Mr. McCullough’s other books include The Johnstown Flood, The Great Bridge, The Path Between the Seas, Mornings on Horseback, Brave Companions, and Truman. His work has been published in ten languages and, in all, more than nine million copies are in print. None of his books has ever been out of print, something that may be said of few writers.

Mr. McCullough is a two-time winner of the prestigious Francis Parkman Prize, and for his work overall he has been honored with the National Book Foundation’s Distinguished Contribution to American Letters Award, and the National Humanities Medal. He has been elected to the American Academy of Arts and Sciences, the American Academy of Arts and Letters, and is the recipient of more than forty honorary degrees.

In a crowded, productive career, he has been an editor, essayist, teacher, lecturer, and a familiar presence on public television both as host of Smithsonian World and The American Experience, and as narrator of numerous documentaries, including The Civil War. “John Adams,” the seven part mini-series on HBO, produced by Tom Hanks, was one of the most acclaimed television events of 2008.

A gifted speaker, Mr. McCullough has lectured in all parts of the country and abroad, as well as at the White House. He is also one of the few private citizens to speak before a joint session of Congress.

Born in Pittsburgh, Mr. McCullough was educated there and at Yale, where he earned a bachelor’s degree with honors in English literature. He is an avid reader, traveler, and has enjoyed a lifelong interest in art and architecture. In addition, he is a devoted painter. Mr. McCullough and his wife Rosalee Barnes McCullough have five children and eighteen grandchildren.

Because of his exceptional and unparalleled contributions to American culture as a historian and storyteller, and his eloquent and engaging books that make history come alive, Reverend President, I hereby recommend David McCullough for the Marquette University degree of Doctor of Letters honoris causa.