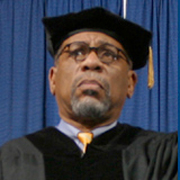 Dr. Arnold L. Mitchem is an internationally recognized leader in advancing the cause of equal educational opportunity. His pioneering work in this field began when he became the founding director of Marquette's Educational Opportunity Program (EOP) in 1969. Under his leadership, EDP gained a national reputation as a model for providing services to help students overcome barriers that traditionally impede access and success in higher education.

During his tenure as EDP Director, Dr. Mitchem was a driving force in the formation of state and regional organizations of similar programs across the country and in promoting availability of federal funding to support this

In 1986 he became the first President of the Council for Opportunity in Education (COE), a national organization to advance the interests of students from backgrounds that impede success in higher education. COE's particular legislative interest is the Federal TRIO Programs, which are designed to provide support services to first-generation college students, low-income students, disabled students, and students who are members of groups underrepresented in higher education. As President of COE, Dr. Mitchem has played a pivotal role in shaping the legislation and regulations that govern these TRIO programs, in garnering broad bipartisan support for their continued funding, and in providing mechanisms to promote widespread adoption of best practices at colleges and universities across the country.

He is a member of the Executive Committee of the European Access Network and of the National Advisory Committee of the Woodrow Wilson National Fellowship Foundation and a trustee of both the Center for Applied Linguistics and the National College Access Network. He is a former trustee of the College Board; and Past President of the Committee for Education Funding, a Washington-based coalition of national education associations that includes the American Council on Education and the Council of Chief State School Officers. He was the first President of the Mid-America Association of Educational Opportunity Program Personnel and is a former member of the First National Inroads Board of Directors.

He has been awarded honorary doctorates from Saint Louis University, the University of Massachusetts-Boston, CUNY-Lehman College, Marycrest College in Iowa, Lewis University in Illinois, and the University of Liverpool, England. He has been named Martin Luther King Jr. - Cesar Chavez - Rosa Parks Professor at Michigan State University and Ralph Metcalfe Chair at Marquette University. He is also the recipient of the 1988 Marquette Educator Alumnus of the Year Award, the Arturo Schomburg Distinguished Service Award from the Association for Equality and Excellence in Education, Inc., and the 2002 Human Relations Award from the National Association for College Admission Counseling.

Because of his leadership in shaping Marquette's EOP as a national model for educational opportunity programming and because of this lifelong commitment to opening the doors of higher education to all students, regardless of background or privilege, Reverend President, I hereby recommend Arnold L. Mitchem for the Marquette University degree of Doctor of Letters, honoris causa.