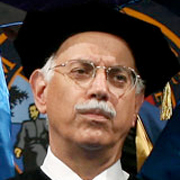 Candidate presented by: Ms. Mary Ellen Stanek, Chair of the Board of Trustees

Andrew S. Natsios is Distinguished Professor in the Practice of Diplomacy on the faculty of the Walsh School of Foreign Service at Georgetown University. He served as the United States Special Presidential Envoy to Sudan from September 2006 to December 2007.

From 2001 to 2006 he served as Administrator of the United States Agency for International Development (USAID), the lead US government agency for doing international development and humanitarian assistance. During this period he managed USAID’s reconstruction programs in Afghanistan, Iraq, and Sudan which totaled more than $14 billion over four years. President George W. Bush has also appointed him Special Coordinator for International Disaster Assistance and Special Humanitarian Coordinator for the Sudan.

From 2000 to 2001 Mr. Natsios, while he was Chairman of the Massachusetts Turnpike Authority, also served as the Chief Executive Officer of Boston’s Big Dig, the largest construction project in American history. He took the project over after $2.4 billion in undisclosed cost overruns were discovered. Prior to that, he served from 1999-2000 as Secretary for Administration and Finance for the Commonwealth of Massachusetts.

From 1993 to 1998 Mr. Natsios was Vice President of World Vision U.S., the largest faith-based non-governmental organization in the world, with programs in 103 countries. From 1987 to 1989 he was Executive Director of the Northeast Public Power Association in Milford, Massachusetts.

The author of numerous articles on foreign policy and humanitarian emergencies, Mr. Natsios has also written two books, U.S. Foreign Policy and the Four Horsemen of the Apocalypse (Center for Strategic and International Studies, 1997), and The Great North Korean Famine (U.S. Institute of Peace, 2001).

After serving 23 years in the U.S. Army Reserves as a civil affairs officer, Mr. Natsios retired in 1995 with the rank of lieutenant colonel. He is a veteran of the first Gulf War.

Because of his meritorious public service and humanitarian efforts and because of his commitment to justice and peace, Reverend President, I hereby recommend Andrew S. Natsios for the Marquette University degree of Doctor of Laws, honoris causa.