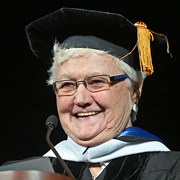 Margaret “Peggy” O’Neill, SC, has dedicated her life to the service and education of others.

Sister Peggy earned her bachelor’s degree from St. Elizabeth College in Morristown, New Jersey, her master’s degree from Marquette University, and her doctorate from New York University. As a theology professor, she taught at Iona College in Rochester, New York for 25 years.

Following a tour of Central America in the early 1980s, Sister Peggy began serving in the Diocese of San Salvador in 1986, assisting refugees and accompanying them during the civil war that was raging in El Salvador at that time. In 2006 Sister Peggy opened El Centro Arte Para la Paz, an educational and cultural center that promotes peace through dance, art and theological reflection, in Suchitoto, El Salvador, on the grounds of the historic Santa Imelda School and Convent. Through programs that strengthen cultural identity and unity within the community, teach skills to support self-sufficiency and critical thinking, promote environmental awareness, teach gender equality, explore nurturing spiritualities, and build bridges between cultures, the Center has served tens of thousands of people since its opening. Sister Peggy has also continued to teach, through Augsburg College’s Center for Global Education in El Salvador, and currently in Santa Clara University’s Casa de la Solidaridad in El Salvador.

A highly respected long-time peace activist, Sister Peggy has received many honors and awards including the 2008 Peacemaker Award of the Congregation of the Sisters of St. Joseph of Peace, and the 2008 Ciudadana Ilustre Award, which recognized her work on behalf of social and cultural development in Suchitoto. This spring the University of Scranton awarded her its Pedro Arrupe, S.J., Award for Distinguished Contributions to Ignatian Mission and Ministry.

Sister Peggy’s energy and zeal have made her a much sought-after speaker, and she has offered memorable keynote addresses at the Ignatian Family Teach-in, inspiring new generations of students with her passion for justice and peace. In a 2012 interview, Sister Peggy offered the following commentary that crystallizes her worldview and her hopes for the people she encounters: “At my funeral it is my desire that someone says, ‘She died on the last day of her life; no sooner. She continued to struggle and grow.’”

Because of her tireless and exemplary witness to a faith that does justice, President Lovell, I hereby recommend Sister Peggy O’Neill of the Sisters of Charity for the Marquette University degree of Doctor of Humane Letters, honoris causa.