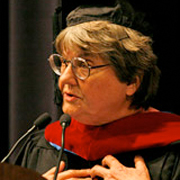 Sister Helen Prejean, CSJ, has been instrumental in sparking national dialogue on the death penalty and helping to shape the Catholic Church’s vigorous opposition to capital punishment.

Sister Helen joined the Sisters of St. Joseph of Medaille in 1957. After earning her bachelor’s degree from St. Mary’s Dominican College in New Orleans and a master’s degree in religious education from St. Paul’s University in Ottawa, Canada, she taught religion to junior and senior high school students. She also served as formation director for her religious community.

Realizing that being on the side of poor people is an essential part of the Gospel, she moved into the St. Thomas Housing Project in New Orleans and began working at Hope House New Orleans, a nonprofit organization dedicated to serving the less fortunate.

During this time, she was asked to correspond with a death row inmate named Patrick Sonnier at Angola State Prison in Louisiana. She agreed and became his spiritual adviser. At the same time, she became concerned with the plight of murder victims’ families and subsequently founded “Survive,” a victim’s advocacy group that provides counseling and support for grieving families. Following Sonnier’s execution, Sister Helen wrote a book about her experiences entitled Dead Man Walking: An Eyewitness Account of the Death Penalty in the United States. Dead Man Walking made the 1994 American Library Associates Notable Book List, it was also nominated for a 1993 Pulitzer Prize, and it spent 31 weeks at number one on the New York Times Best-Seller list. In 1996 the book was made into a major motion picture starring Susan Sarandon as Sister Helen and Sean Penn as a death row inmate.

Since 1984 Sister Helen has divided her time between educating citizens about the death penalty and counseling individual death row prisoners. She has accompanied six men to their deaths. In doing so, she began to suspect that some of those executed were not guilty. This realization inspired her second book, The Death of Innocents: An Eyewitness Account of Wrongful Executions, published in 2004. In that book she tells the story of two men she believes were innocent, taking the reader through the evidence, including evidence the juries never heard, and examining how flaws inextricably entwined in the death penalty system inevitably lead to innocent people being executed.

She is presently at work on her third book, River of Fire: My Spiritual Journey to Death Row. Sister Helen served as chair of the board of the National Coalition to Abolish the Death Penalty. In recognition of her commitment to social justice and the culture of life, she has received many awards and honorary degrees.

For her extraordinary courage, determination, activism, and outreach, it is my great pleasure to recommend Sister Helen Prejean of the Congregation of St. Joseph for the Marquette University Degree of Doctor of Religious Studies honoris causa.