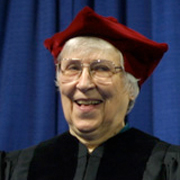 Candidate presented by: Mary Ellen Stanek, member, Board of Trustees

Sister Joel Read, SSSF, President of Alverno College in Milwaukee, is the nation's longest sitting college president. She served as President of Alverno from 1968 to 2003, a thirty-five year tenure during which she earned a well-justified reputation as one of the most notable educational reform advocates in the nation.

In 1986 she was singled out in the book, The Many Lives of Academic Presidents, as one of a handful of college presidents who have broken new educational ground in the past one hundred years. She has been invited to the White House to discuss educational policy by two U.S. Presidents and has been an involved advocate for virtually every major local and national educational reform effort that has taken place during the past thirty-five years.

Under the leadership of Sister Joel, Alverno College began developing in 1971 a distinctive "ability-based" curriculum. Its basic premise is that as students develop knowledge in the various academic disciplines, they should also be mastering the complex skills needed to put that knowledge to capable use. Because of its success with this approach, Alverno has received national and international recognition as an innovative institution of higher learning.

She has received many honors during her career. In 1980 the Harvard University Graduate School of Education named her the first recipient of their Anne Roe Award. Viterbo College presented her with its Pope John XXIII Award in 1977, the Council for Adult and Experiential Learning gave her the Morris T Keeton Award in 1992, and the Wisconsin Women in Higher Education Leadership presented her a Lifetime Leadership Award in 2000 -just to name a few. Sister Joel was named a Presidential appointee to the United States Commission for the Celebration of International Women's Year in 1975-76 and served as a Presidential appointee to the National Council of the National Endowment for the Humanities during the period 1978-84. In 1993 she was invited to become a Fellow of the American Academy of Arts and Sciences.

Prior to becoming president of Alverno College in 1968, she taught history at Alverno and chaired the College's history department. She holds a bachelor's degree in education from Alverno and a master's degree in history from Fordham University, where she also pursued doctoral studies.

Because of her innovative approach to educational reform and her commitment to a values-based education, Reverend President, I hereby recommend Sister Joel Read of the School Sisters of Saint Francis for the Marquette University degree of Doctor of Letters, honoris causa.