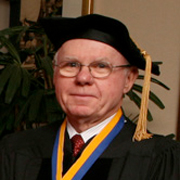 Honorary Degree: Doctor of Letters
Conferred on Richard A. Burke

Richard A. Burke founded Trek Bicycle Corporation in Waterloo, Wisconsin in 1976. Starting with just a handful of employees and a production line of steel touring bikes, Trek embarked on a journey that would eventually make history in the industry by pioneering carbon fiber bicycles. It was this proprietary technology that made the Trek name the envy of the industry. Trek bicycles have won the Tour de France seven times and the company is well-known as the world’s premier bicycle manufacturer. From sponsoring teams such as the Discovery Channel Pro Cycling Team and the Trek Volkswagen Mountain Bike Team to maintaining the world’s largest independent dealer base, Trek proudly retains its role as the number one name in cycling.

An innovative philanthropist, Mr. Burke supports projects that provide special opportunities for young people who will be the future leaders of our community and society. Marquette University is particularly grateful for his partnership in funding both the Burke Scholars and Trinity Fellows, two transformational programs for undergraduate and graduate students who display special talents for public service and leadership in the tradition of Catholic, Jesuit higher education. The Burke Scholars and Trinity Fellows encourage the development of a humanitarian ethic expressed through service to others.

Marquette benefited from Mr. Burke’s wise counsel during his tenure as a member of the university’s Board of Trustees from 1996 to 2005. In 2005 he was elected a Trustee Emeritus for life in recognition of his service to Marquette.

He has also supported a unique cooperative program between Mount Mary and Alverno Colleges for future urban teachers, and a program at Mount Mary for women from the inner city of Milwaukee who are working toward a college degree.

Unlike many philanthropists who focus simply on leaving a legacy, Mr. Burke has a clear vision of how he wants his generosity to make a difference, focusing his Trinity Foundation on urban education, youth, and leadership development – areas where he says “he can and must make a difference.” As he puts it, “If you are fortunate enough to gain resources in this world, you have a responsibility to give back to society.” Marquette is grateful for his commitment to social justice and the example he sets for future leaders.

Mr. Burke is an alumnus of Marquette University who earned his bachelor of science degree from the College of Business Administration in 1956. He subsequently earned a master of science degree from the Massachusetts Institute of Technology in 1979. Well-respected for his business acumen, he serves as Chairman of the Board of both Quad/Graphics and the Roth Corporation.

Mr. Burke has made and continues to make a significant and positive contribution to Marquette and to our Milwaukee community, and he has made arrangements for the continuation of his good works well into the future. Because of his generous support for leaders of the future and the exemplary model of civic engagement he sets, Reverend President, I recommend Richard A. Burke for the Marquette University degree of Doctor of Letters, honoris causa.