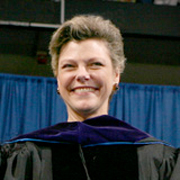 Candidate presented by: Ms. Mary Ellen Stanek, vice chair of the Board of Trustees

Cokie Roberts is a leading and well-respected political analyst, journalist and author, and we at Marquette University are honored that she is delivering the main address at our 124th Commencement exercises.

Ms. Roberts is chief congressional analyst for ABC News and from 1996 to 2002 co-anchored the popular Sunday morning broadcast "This Week With Sam Donaldson and Cokie Roberts." She has covered politics, Congress, and public policy, reporting for "World News Tonight" and other ABC News broadcasts. Before joining ABC News, Ms. Roberts was a regular contributor to public television's "MacNeil/Lehrer Newshour." She won the Weintal Award in recognition of outstanding coverage of the Iran/Contra affair in 1987.

Ms. Roberts also serves as a senior news analyst for National Public Radio, where she was the congressional correspondent for more than ten years. During that time she won numerous awards, including the highest honor in public radio, the Edward R. Murrow Award. She was also the first broadcast journalist to win the highly prestigious Everett McKinley Dirksen Award for coverage of Congress. Her ABC News Special, "Who is Ross Perot?" won an Emmy in 1991.

She is the author of the national bestseller We Are Our Mothers' Daughters, a work that emphasizes the importance of a united community of strong women. Ms. Roberts also wrote Founding Mothers: The Women Who Raised Our Nation, published in 2004, which reveals the lives of the women behind the men who wrote the Declaration of Independence and the Constitution.

With her husband, Steven V. Roberts, a professor at George Washington University and contributing editor at U.S. News & World Report, Ms. Roberts writes a weekly column that is syndicated by United Media and appears in several major national newspapers. Her op-ed columns have been published in the New York Times and the Washington Post, and she has also written for the New York Times Magazine and The Atlantic. She and her husband collaborated on the book, From This Day Forward, which takes a personal look at successful marriages, their own as well as those of other Americans, including Abigail and John Adams. The authors conclude, "Marriage is an act of faith, as well as hope....an unlimited commitment to an unknowable partner."

A 1964 graduate in political science from Wellesley College, Ms. Roberts received a 1985 Distinguished Alumnae Achievement Award in recognition of "excellence and distinction in professional pursuits." She has received fifteen honorary degrees and was appointed by President George W. Bush to the President's Council on Service and Civic Participation. She and her husband are the parents of two adult children and grandparents of four.

Because of her excellence as a journalist, broadcaster, and author and because of her commitment to the ethical personal values that have governed all of her work, Cokie Roberts is commended for the Marquette University degree Doctor of Laws, honoris causa.