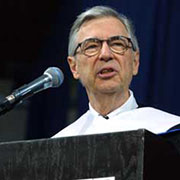 For a long time I wondered why I felt like bowing when people showed their appreciation for the work that I've been privileged to do. What I've come to understand is that we who bow are probably - whether we know it or not - acknowledging the presence of the eternal: we're bowing to the eternal in our neighbor. You see, I believe that appreciation is a holy thing, that when we look for what's best in the person we happen to be with at the moment, we're doing what God does. So, in loving and appreciating our neighbor, we're participating in something truly sacred.

Thank you for your warm welcome. Some of you I've known for just a little while. Some I've known through correspondence and through television for many years. I'm mindful of the variety of feelings ... the variety of blessings ... which you bring to this moment, and I'm very grateful to be with you.

Early in the morning of every workday before I even get to my office, I see someone who influences me greatly. This person has a job which many people might consider unglamorous and tediously mundane. He's the locker room attendant in Pittsburgh where I swim each day. His name is Jeff. We recently celebrated Jeff's 25th anniversary working at the pool - 25 years cleaning sinks and sorting towels and caring about everybody. For his anniversary, some of us regulars got him a cake and a book about New York because Jeff loves New York. "Honk, honk, honk" he says when he talks about it, and he loves to watch the "Today" show with people lined up on the streets around Rockefeller Plaza.

Well, a few weeks ago I told Jeff about writing this commencement speech, and I asked him what he thought I should say. "Tell them to be glad of who they are. They might get to be president or a teacher or a doctor or just themselves whoever they are. Everybody can do something." And he went right back to scrubbing the showers.

"Blessed are the pure in heart..." To appreciate our life - and do what we can so others might appreciate theirs.

A few years ago I was asked to be part of a White House meeting about children and television. Many broadcasters from all over the country were there. Since I was supposed to be one of the speakers, I was seated beside Mrs. Clinton who afterwards said, "congratulations," and was whisked away to her next meeting.

But as I was leaving that enormous room, I heard something from one of the military guards who was all dressed up in white and gold looking like a statue. I heard him whisper, "Thanks, Mister Rogers." So I went over to him, noticed that his eyes were moist, and I asked him, "thanks for what?"

"Well, sir," he said, "as I listened to you today I started to remember my grandfather's brother. I haven't thought about him in years. I was only 7 when he died, but just before that, he gave me his favorite fishing rod. I've just been thinking, maybe that's why I like fishing so much and why I like to show the kids in my neighborhood all about it."

Well, as far as I'm concerned the major reason for my going to Washington that day was that military guard and nourishing the memory of his great uncle. What marvelous mysteries we're privileged to be part of! Why would that young man be assigned to guard that particular room on that particular day? It's slender threads like that that weave this complex fabric of our life together.

I wonder if you've heard what happened at the Seattle Special Olympics a few years ago? For the 100-yard dash there were nine contestants, all of them so-called physically or mentally disabled. All nine of them assembled at the starting line; and, at the sound of the gun they took off - but one little boy stumbled and fell and hurt his knee and began to cry. The other eight children heard the boy crying. They slowed down, turned around, saw the boy and ran back to him - every one of them ran back to him. One little girl with Down syndrome bent down and kissed the boy and said, "this will make it better."

The little boy got up, and he and the rest of the runners linked their arms together and joyfully walked to the finish line.

They all finished the race at the same time. And when they did, everyone in the stadium stood up and clapped and whistled and cheered for a long, long time. People who were there are still telling the story with obvious delight. And you know why, because deep down we know that what matters in this life is much more than winning for ourselves. What really matters is helping others win, too, even if it means slowing down and changing our course now and then.

There's a part of all of us that longs to know that even what's weakest about us can ultimately count for something good.

When I graduated from college I had little notion of how I'd ever be able to put together all the interests that I had. It took a good deal of time, and my parents probably wondered if I'd ever be able to make anything of all I'd been given; but after a lot of help from a lot of people, I'll never forget the sense of wholeness I felt when I finally realized what, in fact, I really was: not just a song writer or a language buff or a student of human development or a telecommunicator, but I was someone who could use every single talent that had ever been given to me in the service of children (and their families). I can tell you that it was that particular focus that made all the difference. I can also tell you that none of that was written on the back of my college diploma. It's a miracle when we finally discover whom we're best equipped to serve, when we can best appreciate the unique life we've been given.

One day I was privileged to sit in on one of Yo-Yo Ma's master cello classes. Now, Yo-Yo is one of the great appreciators of our world. It seems that people always walk taller after they've had an encounter with him. The only thing that's larger than his talent is his heart.

Well, nobody else can live the life you live. And even though no human being is perfect, we always have the chance to bring what's unique about us to live in a redeeming way.

Beside my chair in my office is a framed piece of calligraphy with a sentence from Saint Exupery's book, The Little Prince (Le Petit Prince). It reads: "L'essentiel est invisible pour les yeux." ("What is essential is invisible to the eye.") I feel the closer we get to knowing and living the truth of that sentence, the closer we get to wisdom.

What is essential about you that is invisible to the eye? And who are those who have helped you become who you are today?

Anyone who has ever graduated from a university, anyone who has ever been able to sustain a good work has had at least one person - and often many - who believed in him or her. We just don't get to be competent human beings without many different investments from others.

I'd like to give you all an invisible gift; a gift of silence to think about those who nourish you at the deepest part of your being - anyone who has ever loved you and wanted what was best for you in life. Some of those people may be right here today. Some may be far away, some may even be in heaven; but if they've encouraged you to come closer to what you know to be essential about life, I'd like you to have a silent minute to think of them. One minute: I'll watch the time.

One minute of silence

Whomever you've been thinking about: just imagine how grateful they must be that at this extra special moment in your life, you're remembering them with such thanksgiving.

You know, the Greek word for "thanks" is eukapist (eucharist). The way we say "thank you" to God and to each other is the greatest imaginable form of appreciation. In fact, the reason we are created in God's image - in God's tzelem - is to be God's representatives on this earth - to do here what God would do - to take care of the land and each other as God would take care of us.

You don't ever have to do anything sensational in order to love or to be loved. The real drama of life (that which matters most) is rarely center stage or in the spotlight. In fact, it has nothing to do with IQs and honors and the fancy outsides of life.

What really nourishes our souls is the knowing that we can be trusted, that we never have to fear the truth, that the foundation of our very being is good stuff.

I wanted to be with you today because I know that many of you grew up with our television neighborhood - some as children, some as parents - and I'm proud of the way you've grown.

Before I say goodbye and bow again to the eternal within you, I'd like to give you the words of one of my favorite neighborhood songs. This song is called It's You I Like.

Congratulations to you all.