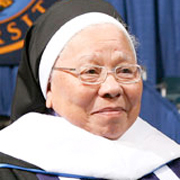 Sister Maria Rosa Leggol, OSF, is a humble servant of God whose formal education never went beyond the fifth grade. Undeterred by her lack of a formal education, she has raised and educated over the past fifty years more than 40,000 Honduran orphans. As an orphan herself, Sister Maria Rosa understood the challenges that children face without a family. At the age of six she became curious when she encountered two German religious sisters. After learning from a local priest about religious life, she decided at that young age that this, too, would be her life’s work. Over time and as a result of her persistence and determination, she joined the School Sisters of Saint Francis at that order’s Mother House in Milwaukee. She completed her novitiate at the age of 24, and is celebrating her 60th anniversary of religious life this year.

In 1949 Sister Maria Rosa returned to her homeland to begin her mission of helping others. As a young sister, she was assigned to work in a hospital in Tegucigalpa, Honduras. She was committed to her work, especially that of comforting the sick and dying. It was this sense of compassion that led her to found Sociedad Amigos de los Niños, an orphanage. Today with her colleagues at Sociedad Amigos de los Niños she houses 625 children at four different sites, providing not just a roof over their heads and hot meals, but an education, love and care, and religious instruction that provides these children with the opportunity to live life fully and become responsible citizens. Sister Maria Rosa has saved literally thousands of children from lives of poverty, disease, and neglect.

Sister Maria Rosa has also served as a catalyst for many other programs that assist the people of Honduras, including 86 free health clinics across that country. With assistance of health care teams from an organization called Global Brigades, thousands of people are served each year at these mobile medical clinics that bring medical and dental care to remote areas of Honduras. At present more than 80 universities now contribute to this effort, with Marquette University being in 2003 the very first to do so. To date, more than 200 Marquette students, professors, and staff members have participated in Sister Maria Rosa’s program of physical, personal, and emotional care.

For her extraordinary acts of compassion, for being an inspiration to people all over the world, and for exemplifying the spirit of magis by being a woman for others, Reverend President, it is my great pleasure to hereby recommend Sister Maria Rosa Leggol of the School Sisters of Saint Francis for the Marquette University Degree of Doctor of Humane Letters, honoris causa.